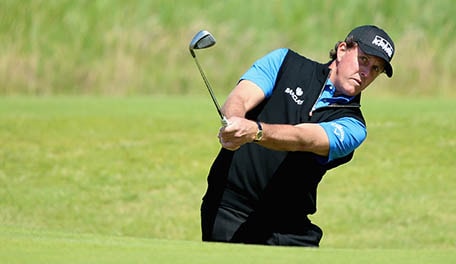 Phil Mickelson took awhile to get his feet under him at the Aberdeen Asset Management Scottish Open.

Mickelson played his first four holes in 2 over at Gullane Golf Club, and while he rallied back with four subsequent birdies he ended with a 1-under 69 in the opening round. That score left the southpaw six shots off the early pace set by Denmark's Thorbjorn Olesen.

Making his first start since the U.S. Open, Mickelson followed a bogey on No. 3 with another bogey on the par-4 fourth. He bounced back with a birdie on No. 5 to make the turn in 1 over, then added circles on Nos. 10, 15 and 16. After finding the green on the par-3 17th, Mickelson three-putted from across the green and then failed to birdie the home hole from close range.

Mickelson won this event two years ago at Castle Stuart, then went on to lift the claret jug the following week at Muirfield. He remains the only player to pull off the impressive double, though his chances of victory this week are now dampened with more than 50 names already ahead of his in the standings.