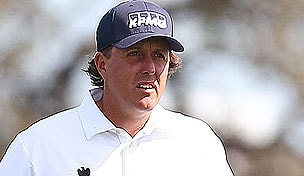 Phil Mickelson withdrew from the Valero Texas Open after 10 holes Saturday, citing a pulled muscle in his right side.

Mickelson was 1 over for the round and 4 over for the week when he called it quits. Television coverage showed Mickelson being carted off the course at TPC San Antonio and stated that the injury was a pulled oblique muscle.

"My back's feeling great, my body's feeling great. I felt as good as I have all year," Mickelson said in a statement. "My speed is back, I was hitting the ball hard, driving it great.

"I pulled a muscle on my downswing trying to hit the ball hard on the first hole (his 10th). It just killed and it wouldn't subside for 10 or 12 seconds."

Having opened with a 77, the 43-year-old rallied to make the cut on the number after getting up and down from the water hazard on No. 18 to close his second round.

Mickelson's caddie, Jim "Bones" Mackay, spoke with Golf Channel's Steve Sands after the withdrawal and explained that Mickelson's preparations for the Masters may have led to the injury.

"As you might imagine, he's trying to get ready for Augusta, he's hitting a lot of drivers, hitting them harder," Mackay said. "He hit one off the first tee, his 10th hole today and just felt a little pain in his side. It continued on for a few minutes and he just decided that he didn't want to take anything to chance relative to what's going on the next couple weeks."

This marks the second time Mickelson has withdrawn from a PGA Tour event in 2014. He also withdrew prior to the start of the third round of the Farmers Insurance Open in January because of back pain.

Mickelson has struggled to find his form in 2014, and his last top-10 finish on the PGA Tour came at The Barclays in August. He was a late addition to the Valero field, opting to return to San Antonio for the first time since 1992 in order to play more competitive rounds heading into the Masters.

"I haven't had the success I've wanted to early on at the start of the season," he told reporters Thursday. "I want to get in contention, I want to have a competitive round and work on playing proper golf and managing the game and the rounds."

Mickelson is still scheduled to tee it up at the Shell Houston Open, his final start before beginning his quest for a fourth green jacket. Reports earlier this week indicated that he would make a scouting trip to Augusta National early next week before heading to Houston, but those plans have now changed and his spot in the field at Redstone remains in doubt.

"I'm going to go back to San Diego for a couple days and have a doctor take a look at it, but there's really not much you can do for a pulled muscle," Mickelson said. "I hope I'll be OK to play the (Shell Houston Open) but I just don't know."

Mackay echoed his player's concern regarding next week's prognosis.

"In a perfect world, he'd love to play Houston. He loves the tournament, loves the city and it's great preparation for Augusta," Mackay said. "Obviously, he's going to make the right decision relative to what his body's telling him."