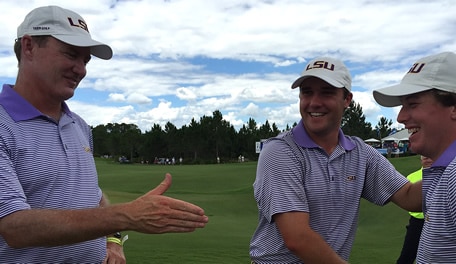 Ben Taylor, who holed the clinching putt for LSU at the NCAA Championship, was one of 12 players who qualified for the Open Championship on Tuesday.

Taylor, whose par putt on the final green gave LSU a 4-1 victory over Southern Cal on June 3, shot 5-under 137 to share medalist honors at Royal Cinque Ports. The other players to advance out of this qualifier were Gary Boyd and amateur Alister Balcombe.

Two-time U.S. Open champion Retief Goosen was one of the three qualifiers at Woburn, along with amateur Paul Dunne, who recently completed his college career at UAB, and Robert Dinwiddie. Goosen, who finished fourth at last week’s BMW International Open on the European Tour, hasn’t played in the Open since 2012.

Jordan Niebrugge, a senior at Oklahoma State and a member of the 2013 U.S. Walker Cup team, shared the top spot at the Hillside qualifier (3 under), along with Scott Arnold and Pelle Edberg.

In all, five of the 12 spots went to amateurs.