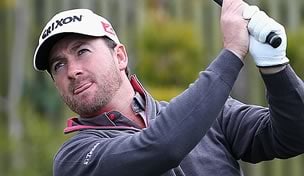 MARANA, Ariz. – Graeme McDowell and Gary Woodland are neighbors at Lake Nona, the tony Orlando, Fla.-enclave, and spend plenty of time together on the practice range, but Wednesday’s bout at the WGC-Accenture Match Play Championship was a first.

“No, we don’t play match play at home,” said McDowell, who rallied to beat Woodland in 19 holes. “I tend to not play with guys like that because they brutalize me.”

Through 15 holes that about summed up G-Mac’s match against Woodland, who flew out to Arizona for this week’s event with McDowell. The Ulsterman was 3 down with three to play before pulling off the day’s best comeback.

Considering how much time the two spend together in Central Florida, McDowell wasn’t surprised with Woodland’s solid play and even tried to prepare himself for the American’s power game.

“I played the last two days with (alternate) Brooks Koepka to try and acclimatize myself,” he laughed.