New attitude paying off for Garrigus 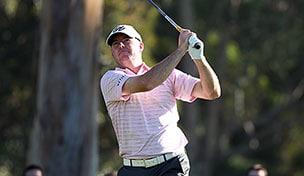 LOS ANGELES – Robert Garrigus is pulling off quite the Jedi mind trick so far this week.

Garrigus has a poor history at the Northern Trust Open. He shot a 79 in the opening round at Riviera in his last start here in 2012 and withdrew. It was the third time in four starts at Riviera that he failed to make the cut.

After posting a 4-under-par 67 Friday, Garrigus finds himself in the hunt with a chance to win an event that has tortured him in the past. He’s just a shot behind Sang-Moon Bae going into the weekend.

“I changed my attitude,” Garrigus said.

And how did he manage that?

“I'm pretty strong mentally,” he said. “I guess I've dealt with a lot of things in my life that lead to that. I'm sure you all are very aware of that. I can will myself to do that. I have pretty good willpower. So as soon as I stepped on the first hole this week, I'm like, `I absolutely love this place.’”

Garrigus, 36, made reference to his overcoming substance abuse to turn his life around in 2003. He has stated publicly that he smoked marijuana while playing golf before his treatment.

Garrigus is looking for his second PGA Tour title. He won the Children’s Miracle Network Classic in 2010.