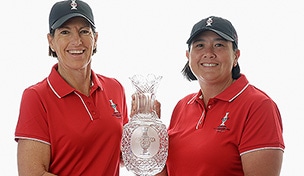 Getty Images
DUBLIN, OH - JUNE 04: Bryson DeChambeau points following a shot on the fifth hole during the third round of The Memorial Tournament at Muirfield Village Golf Club on June 4, 2016 in Dublin, Ohio. (Photo by Sam Greenwood/Getty Images)
-

PHOENIX – Juli Inkster says she wants to get the Americans to be looser, not wound so tight, in the Solheim Cup, and she meant it.

By the way, Inkster who jokes about her lack of fashion, says her assistant captain, Pat Hurst, will be in charge of choosing the team uniforms. Hurst, by the way, also showed up for the announcement wearing flip flops. Hurst said she’ll be relying on Juli’s daughter, Hayley, in making team uniform choices.

Inkster doesn’t count herself as a detail-oriented person. She says Hurst is, and she will rely on her in that way.

“I’m not a huge number cruncher,” Inkster said. “I kind of go by the seat of my pants, a little bit. I really trust my gut, my heart, and I do a lot more that way.”

Inkster is in this week's field at the Founders Cup. She is scheduled to tee off with Cristie Kerr and Sandra Gal Thursday 12:35 p.m. local time.