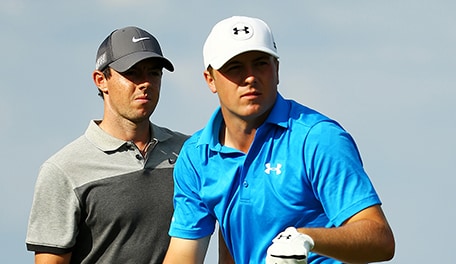 Jordan Spieth didn't chase down Jason Day at the PGA Championship, but he did catch Rory McIlroy.

With his second-place finish at Whistling Straits, Spieth ascended to No. 1 in the Official World Golf Ranking, bumping McIlroy to No. 2.

Spieth is the fifth American to ever reach No. 1 - joining Fred Couples, Tom Lehman, David Duval and Tiger Woods. At 22, he is the second-youngest player to ever reach the top spot, behind only Woods, who did it at 21.

As for Sunday's champion, Day is now the third-ranked player in the world, his highest ranking to date.

And in our weekly Tiger Woods watch, the former world No. 1 dropped from 278th to 286th with his early exit in Wisconsin. He sits sandwiched between Brazil's Lucas Lee and South Korea's S.J. Park.