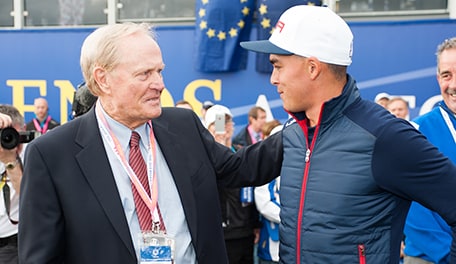 If you think the only real solution to the United States' Ryder Cup woes is better play, you'll be happy to hear from Jack Nicklaus.

Speaking with NBC broadcasters Dan Hicks and Johnny Miller in the 18th tower at PGA National on Sunday, Nicklaus was asked for his take on the U.S. Ryder Cup task force and its selection of Davis Love III as captain.

"It goes in cycles," Nicklaus started. "I’m not really in the middle of it right now, so I don’t think it’s fair for to comment too much on that, except, I just feel the United States had [a good run] for a while, Europe’s had a good run, it’ll come back around to the U.S."

Although he said he didn't want to comment too much, he was further prodded by the announce team – and he did keep talking.

After citing 54-hole Honda Classic leader Ian Poulter as someone who really thrives in and gets excited for the Ryder Cup, Nicklaus furthered mentioned that the United States' commitment to playing a team event each year – the Ryder Cup and Presidents Cup – could explain some of the disparity related to how the U.S. and Europe approach the event.

"Our guys are playing the Ryder Cup and Presidents Cup each year, and I think it’s a little hard for the guys to expect them to be 100 percent every year," Nicklaus said.

"Be patient," he insisted. "We don’t have to do a bunch of things to figure out how to win the Ryder Cup. Just go play golf. ...

"I'm a little bit too casual, probably, about a lot of things, but you can’t force good play.  Good play comes from good hard work and actually being prepared to play, not being forced to play."