No. 1 Park, No. 2 Pettersen tied at Mission Hills 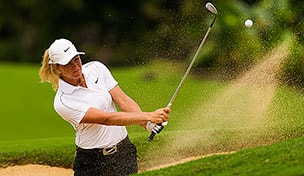 Getty Images
SHEBOYGAN, WI - AUGUST 16: Jason Day of Australia poses with the Wanamaker Trophy and his wife Ellie and son Dash after winning the 2015 PGA Championship with a score of 20-under par at Whistling Straits on August 16, 2015 in Sheboygan, Wisconsin. (Photo by Andrew Redington/Getty Images)  -

Rolex world No. 1 Inbee Park and No. 2 Suzann Pettersen will face off Sunday as co-leaders in a head-to-head, final-round showdown at the World Ladies Championship in Haikou, China.

Park blistered the Blackstone course at Mission Hills Saturday with an 11-under-par 62 to catch the defending champion Pettersen (66), who led the Ladies European Tour event after the first two rounds.

At 18-under 201, they’re four shots clear of Ye Na Chung. Ariya Jutanugarn, coming back from shoulder surgery, is five back.

Pettersen has been pushing Park hard for the No. 1 ranking since late fall of last year, but she hasn’t been able to catch her. Even if Pettersen wins Sunday, there aren’t enough world-ranking points available to pass Park.

Park’s 62 equaled the course record on the Blackstone course.

“It’s my career best round today, so, obviously, it was a fantastic round,” Park said in her post-round news conference.

Park made her historic run winning the first three majors of 2013 with the best putting stroke in the game. She liked the way her putting came around around again Saturday.

“The last couple days, the putting has been really hard,” Park said. “These greens are a little bit grainy and much slower. We played on very fast greens the last two weeks, and I just came here and I wasn’t used to the greens. I had a lot of putts the last few days, but today everything seemed like it was going the right way, and I made a lot of putts.”

“I have my number in mind, and I’m going to do everything in my power to get to that number,” Pettersen said. “I’m not going to tell you what it is, but I’m pretty sure it will be enough.”