No. 1-ranked am Rodgers to turn pro after NCAAs 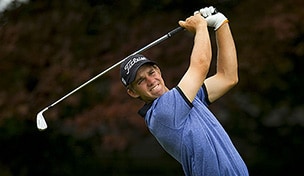 Getty Images
Ryan Moore drives during the first round of the 2005 Barclays Classic at Westchester Country Club in Harrison, New York on June 23, 2005.Photo by Michael Cohen/WireImage.com  -

Stanford junior Patrick Rodgers, the No. 1-ranked amateur in the world, will turn pro after this year’s NCAA Championship.

Rodgers, a two-time first-team All-American, has seven wins with the Cardinal, tied for second-most in school history. Tiger Woods, with 11 wins, has the most. Rodgers currently holds the school record for lowest career scoring average (70.55), ahead of Woods (70.96). He is ranked 13th by Golfstat.

“The reason for coming out with this announcement now is over the past year, there has been growing speculation of what my plans would be,” Rodgers said in a school release. “I thought I owed it to the team, to Coach (Conrad) Ray, and Stanford University to get ahead of the situation and come out with it now in order for it to not become a distraction for myself or the team.

“I think we have an amazing team – the best that we’ve had in my three years here – and we have an opportunity to do something special. I want to put all of the focus on trying to win a national championship for the team.”

Rodgers, 21, was a member of both the 2011 and 2013 U.S. Walker Cup teams. He has played in a few PGA and Web.com tour events in the past few years, including a 15th-place showing at the 2013 John Deere Classic. He missed the cut in both the Travelers and John Deere in ’12.

In a story on the school’s website, Rodgers said that he consulted with another former Stanford athlete, quarterback Andrew Luck, before making his decision. Luck left school with one year of eligibility and was the No. 1 overall pick in the NFL draft.

“We have a neat connection,” Rodgers told the website. “He gave me some great insight about what pro sports are like and what went through his mind. I thought he handled the situation with such class and did everything the right way.”

Rodgers was part of the much-ballyhooed 2011 class that included Jordan Spieth and Justin Thomas. Spieth left Texas after a year and a half, while Thomas opted to forgo his final two years of eligibility at Alabama after his team won the 2013 NCAA Championship.

Spieth has gone on to win on the PGA Tour and earn Rookie of the Year honors.

“Seeing the success of so many of the guys I played with on the Walker Cup team and played college golf against weighed a lot into my decision,” Rodgers told the website. “After seeing their success, I really feel like I’m ready to go out there and succeed.”