No. 1 ranking, Masters invites up for grabs in Austin 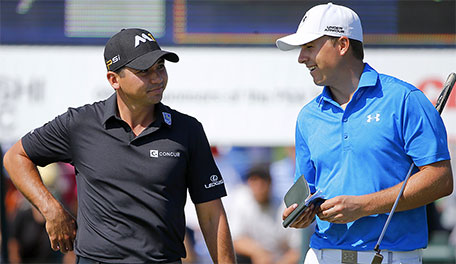 AUSTIN, Texas – The No. 1 ranking and two spots in the Masters are potentially up for grabs this weekend at the WGC-Dell Match Play.

Jason Day could overtake Jordan Spieth for the top spot if Spieth loses his round of 16 match Saturday morning and Day wins both of his matches to advance to the semifinals, according to Golf Channel world-rankings guru Alan Robison.

There also is a scenario in which if Spieth loses his quarterfinal match, Day could rise to No. 1 if he wins both of his matches Saturday. If both Spieth and Day reach the semifinals, Day would need to finish ahead of Spieth to move to No. 1.

Rory McIlroy will remain at No. 3 in the rankings even if he defends his title this week at Austin Country Club, according to Robison.

Also worth keeping an eye on is the top 50. This is the final week to qualify for the Masters via the world ranking.

Only two of the top 16 players remaining are not yet exempt into the year’s first major: Rafael Cabrera-Bello and Patton Kizzire.

If Cabrera-Bello wins his Saturday morning match against Byeong-Hun An, the Spaniard will slide inside the top 50 and earn an invitation to the Masters.

Kizzire, a PGA Tour rookie, would need to win both of his matches Saturday to move into the top 50. He plays Ryan Moore in the round of 16 and would face either Cabrera-Bello or An on Saturday afternoon.