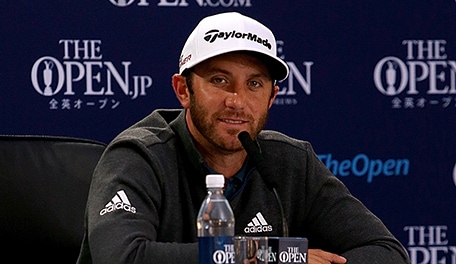 ST. ANDREWS, Scotland – So, here we go again. Dustin Johnson is in the lead of another major championship, searching for his first title.

Johnson has four top-five finishes in majors but it’s his disastrous finishes that have lived in infamy. A final-round 82 at the 2010 U.S. Open moved him out of contention quickly, the bunker snafu later that year at the PGA Championship at Whistling Straits was a freak thing, and the errant 2-iron on the 14th hole at Royal St. George’s in 2011 was inexcusable. But the three-putt from 13-feet to lose the U.S. Open last month at Chambers Bay takes the cake.

Johnson is knocking on the door again. He shot 65-69 in his first two rounds to sit at 10 under par and lead the Open Championship by a shot over Danny Willett.

Here are some stats regarding Johnson:

• Either Johnson or Jordan Spieth have held the lead or a share of the lead in all 10 major championship rounds this year.

• Johnson’s 10-under-par total is the best 36-hole score of his major championship career.

• This is Johnson’s first career 36-hole lead in a major.

• This is the sixth 36-hole lead of Johnson’s PGA Tour career. He’s won three of the previous five.

• This is the fifth straight major start in which Johnson has been inside the top five after two rounds.

• Johnson is the fifth U.S. Open runner-up in the modern era to lead the British Open through 36 holes. Each of the previous four players to accomplish that won the British.