Like old times for buddies Baird, Hart at Honda 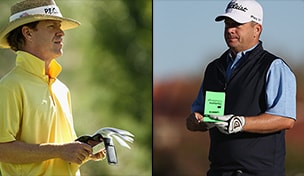 PALM BEACH GARDENS, Fla. – Briny Baird learned to play under duress as a boy growing up in South Florida.

He can thank a mischievous Dudley Hart for that.

To Baird’s dismay, one summer Hart figured out how to shoot bottle rockets from his hand.

“The crazy son of a gun would chase me around,” Baird said. “He shot one off my back.”

“Briny was the little brother I never had,” Hart said. “Every now and then, he still likes to tell stories about how mean I was to him growing up.”

Hart, 45, and Baird, 41, grew up playing together as juniors at LaGorce Country Club in Miami Beach. Hart was the son of the head pro there, Chuck Hart. Baird was the son of Butch Baird, who won two PGA Tour events.

“My sister and I were just going through a box of old pictures at my mom’s, and we found about a half dozen pictures of Briny and I at a tournament, when he was probably 10 years old,” Hart said. “It brought back a lot of fond memories. We were really the only kids who played at LaGorce. We traveled together playing a lot of junior tournaments. We had a lot of fun as kids.”

Baird cracks that Hart had fun throwing him around “like a rag doll” in the hotel rooms they shared at junior events.

Hart’s return to the Honda Classic is special for a lot of reasons. He won this event when it was played at Heron Bay in 2000. He’s renewing South Florida ties while trying to rekindle his best form in South Florida’s familiar turf and winds.

Hart and Baird are still like brothers. On the range Tuesday morning, Hart stood behind Baird, helping Baird hit crisper chips off the soft, grainy grasses at PGA National, showing him how to use more bounce to keep the leading edge from sticking in the grain. And a little while later, Baird was standing behind Hart, watching him hit full shots, being Hart’s eyes, checking positions of his swing.

Hart’s and Baird’s journeys have seen their share of successes and challenges. Hart, who struggled with a bad back most of his career, is playing on a major medical extension after a second back surgery in April of 2012. It took him 18 months to fully recover. Before this year, he teed it up just once in four previous seasons. He has 10 starts this year to make $460,000 to keep his exempt status.

Baird has had his share of heartbreaks chasing that elusive first PGA Tour title.

“We didn’t talk every week while I was out, but we stayed in touch,” Hart said. “I followed him and all my buddies out here. It’s just nice to be back out with them this week.”