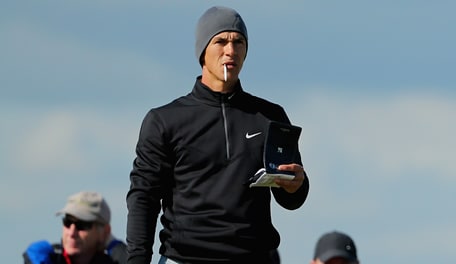 Scores were low this morning in Scotland, where a Dane on the comeback trail set the early mark. Here is how things look after the first round of the Aberdeen Asset Management Scottish Open, as Thorbjorn Olesen holds a two-shot advantage:

What it means: The best scoring conditions were found early on at Gullane Golf Club, as each of the top seven names played in the morning wave. They were led by Olesen, a 25-year-old still on the road to recovery after injuries cost him significant time over the past two years, with a number of big names still within striking distance.

Round of the day: Olesen made it around Gullane without dropping a shot, finding 16 of 18 greens in regulation. The Dane carded a trio of front-nine birdies and then picked up three in a row on Nos. 15-17 to end his round with plenty of momentum. A 7-under 63 moved him to the top spot as he looks to win for the third time on the European Tour.

Best of the rest: Walker already has two wins this year on the PGA Tour, and he is in contention for another trophy after a 5-under 65 in the opening round. Walker found only 12/18 greens in regulation but needed just 26 putts, with three back-nine birdies highlighting a scorecard that didn't include a bogey.

Biggest disappointment: Colin Montgomerie has found a bit of a resurgence since turning 50, but he was unable to give the Scottish fans much to cheer about with an opening 74. Montgomerie made only one birdie during his round, opening with a bogey on No. 1 and closing with a triple bogey on No. 18 to drop the Scot 11 shots off the pace.

Main storyline heading into Friday: It remains to be seen if Olesen can demonstrate the consistency needed to maintain his lead, but one thing is certain: the group of players at 4 under will come calling. That group, three shots behind Olesen, includes Americans Matt Kuchar and Rickie Fowler in addition to Graeme McDowell and defending champ Justin Rose.

Quote of the day: "I think that links golf suits my game decently well." - Walker, who finished T-26 last year at the Open Championship.