One Time With Tiger: Arron Oberholser 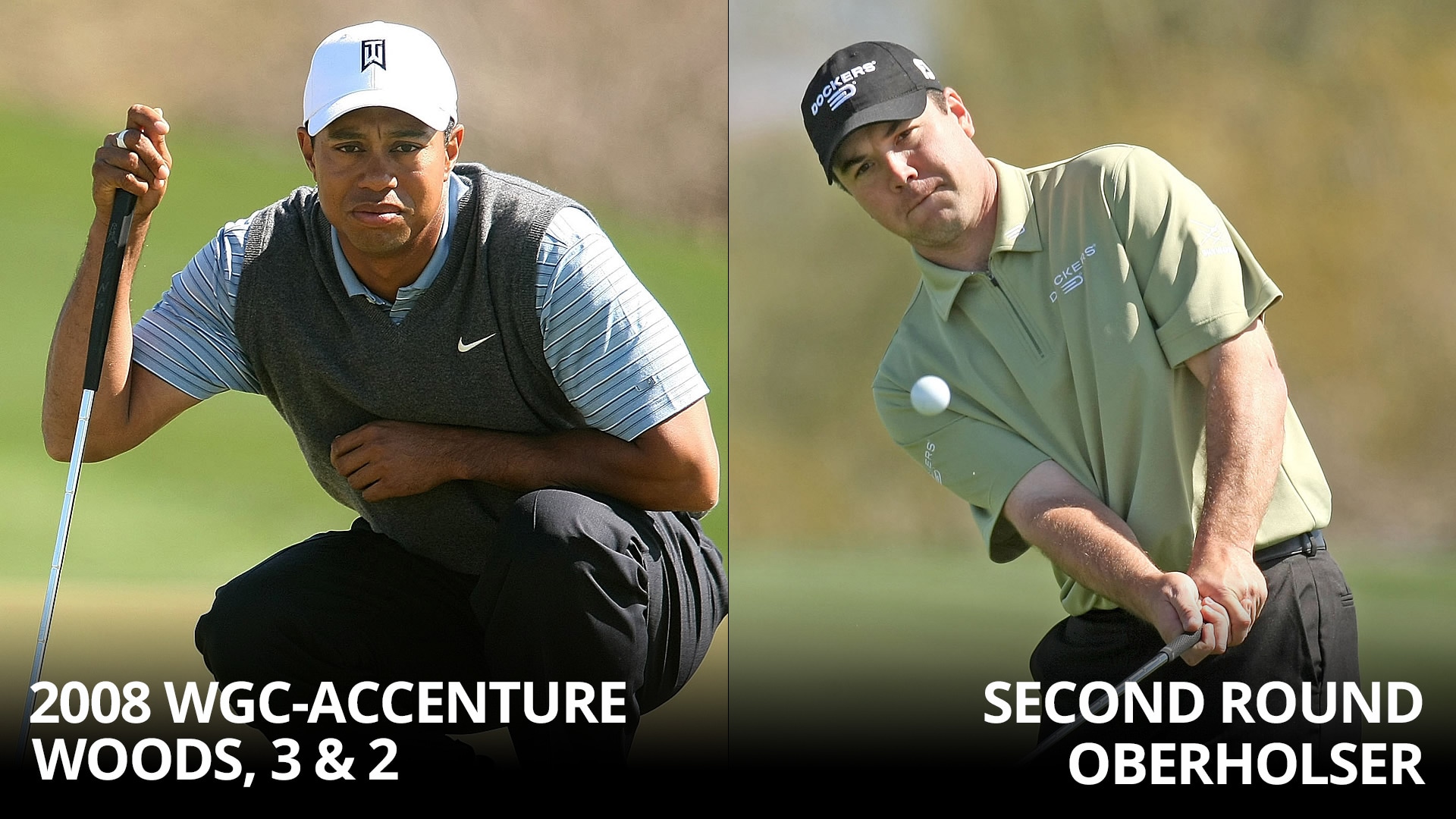 Tiger Woods and Arron Oberholser once were fierce rivals. Separated by 20 miles, Woods, a sophomore at Stanford, and Oberholser, a junior at San Jose State, each won six college titles entering the 1996 postseason. Battling for Player of the Year, Woods swept the regionals and the NCAA Championship to take top honors, while Oberholser finished second in every statistical category. Then their career paths diverged.

That summer, Woods captured his third consecutive U.S. Amateur. He won twice in his first seven starts as a pro. And then, nearly a year to the day after outdueling Woods at the Western Intercollegiate, Oberholser watched in his college apartment as Woods torched Augusta National during his game-changing Masters victory in 1997.

“Before, I thought I could hang,” Oberholser said, “but after that, I knew it was over. I couldn’t do that.”

It would take 11 years for the college rivals to have their one – and only – encounter in the pro ranks, in the Round of 32 at the 2008 WGC-Match Play Championship.

This was peak Tiger, and he arrived in Marana, Ariz., having won seven of his past eight starts. (Four months later, on a broken leg, he would claim his 14th major at the U.S. Open.) Oberholser, meanwhile, was making his first appearance since undergoing hand surgery the previous fall.

The dynamic on the first tee was awkward. “I didn’t know what to expect,” said Oberholser, 41. “I’d heard all the stories. Read all the folklore. It was weird for me, and I was nervous, because it wasn’t like college. I felt like I had to play my best game. Whenever you feel like you absolutely have to play your best to win, that’s when you become the most nervous.

“Rather than just relax and play, he had a way of beating people before you even get to the first tee, because you start to think like that. And when you did, you were done. You were toast. You had no prayer.”

Woods used his usual first-tee intimidation tactics – arriving late to receive the loudest cheer, never looking his opponent in the eye – but eventually he became chummy with his old NorCal pal, sharing stories of his late father, Earl.

Oberholser said Woods was intent on playing “extremely boring golf,” and the world No. 1 closed out the match, 3 and 2, after sinking a cold-blooded, downhill, 8-foot slider for par on 16.

Boring or not, Woods still showed a flair for the dramatic. On the par-5 fifth hole, Woods flared his tee shot miles right, into the desert. The hundreds of fans walking with the group somehow located the ball, and Woods hit a roundhouse hook, around a shrub, that put him back in play.

Woods was about 135 yards away, but his ball was slightly sitting down in the rough – a classic flyer lie. The hole was cut on a tiny shelf, with about 25 square feet to land a shot. “Augusta-like,” Oberholser said. In between clubs, Woods chose 9-iron, and he hit a sawed-off, three-quarter shot that flew no higher than a rooftop and dropped 6 inches from the cup.

“Honestly, this thing came in like it floated, like it landed with full flaps,” Oberholser said. “To this day, it was one of the most beautiful shots I’ve ever seen.

“I turned to my caddie and said ‘I don’t think I could hit that shot if I absolutely had to.’ I had a feeling it was going to be a long, tough day for me.”

Indeed, unlike the way it was in college, Woods vs. Oberholser was no longer a fair fight.