Oosthuizen back to site of 2010 Open dominance 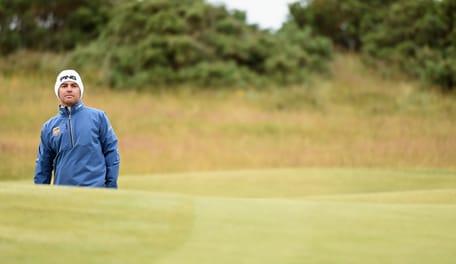 ST. ANDREWS, Scotland – When Louis Oosthuizen arrived at the Old Course for the Open Championship five years ago, not many outside his family knew how to pronounce his name.

This year he arrives as one of the favorites to collect his second claret jug.

Times clearly have changed for Oosthuizen since that dominating seven-shot victory here in 2010. That was only his ninth major start. Now, he’s a seasoned, 32-year-old veteran who has spent many days in contention in the game’s biggest events.

Three years ago, Oosthuizen lost to Bubba Watson in a playoff at the Masters. Last month at Chambers Bay he brushed off a horrible first-round 77 at the U.S. Open and tied for second place, one shot behind Jordan Spieth.

“It will give me the confidence knowing what I’ve done here and that I can play this golf course,” Oosthuizen said. “But you still need to go out and play a good score, play good golf around this track.”

Although Oosthuizen has good vibes around the Old Course he has been wildly inconsistent this year. He’s collected five top-10 finishes on the PGA Tour, but he’s also missed four cuts. That resume has made him turn to the Spieth method of putting, where he looks at the hole when he putts rather than at the ball.

Oosthuizen, No. 17 in the world ranking, will have to be more committed to his game plan this week if he hopes to produce similar results to 2010. He says he can’t remember his routine prior to that Open, but prepared for this week just as he has for majors over the past two years. It helps that he loves links golf.

“Everyone is trying to play to be on the back nine on Sunday and try to have a chance to win a major,” he said. “That’s really when you see how you’re going to react in that situation when you’re actually in it.”