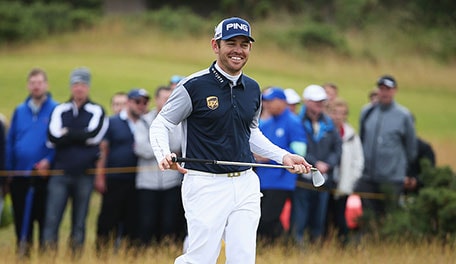 ST. ANDREWS, Scotland – Dustin Johnson coughed up the second-round lead and closed with three consecutive bogeys. Jordan Spieth and Jason Day made runs up the leaderboard. Amateur Paul Dunne holds a share of the lead.

Meanwhile, quietly, Louis Oosthuizen, the 2010 Open champion here at the Old Course, shot 5-under 67 and is tied for the lead. He made seven birdies (including one on the home hole) and two bogeys and will be paired with Dunne in the final group Monday.

Oosthuizen’s position should not be a surprise at all, and truthfully, he should receive more attention than he has for his 12-under performance after 54 holes.

“I love the golf course,” Oosthuizen, 32, said. “I love this style of golf that you need to play here. I just feel very comfortable on this track.”

That’s the first reason why Oosthuizen is not a surprise. For the second, rewind a month ago to the U.S. Open. Paired with Tiger Woods and Rickie Fowler, Oosthuizen shot an opening-round 77 at Chambers Bay and was an afterthought. He rebounded with 66-66-67 to tie for second place, one shot behind Spieth.

Those good vibes, coupled with good vibes of the Old Course, have proved to be a potent combo.

“Knowing I’ve done it before at this golf course, I will take a lot from that,” Oosthuizen said. “But there’s a lot of golf that needs to be played.

“Jordan is obviously looking at making history, so you can expect him to fire on early and really be up there. Jason is playing unbelievable. There’s so many players that can still win this.”