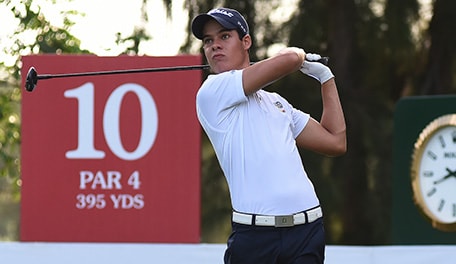 Alvaro Ortiz and Jose Andres Miranda were among those who took advantage of the calmer conditions, posting 4-under 68s in the morning to share the early lead at Casa de Campo. Raul Pereda de la Huerta, Erick Juan Morales and Daniel Kenji Ishii were another shot back.

The winner of the Latin America Amateur receives an invitation to the Masters.

“I go out on the golf course without expectations,” said Ortiz, a sophomore at Arkansas who is the younger brother of PGA Tour player Carlos Ortiz. “It helps me to remain calm, to play better. It’s going to help me throughout the tournament, because this is a very difficult golf course.”

At the beginning of the week, many players expected the winning score to be somewhere around 3 or 4 under par. A heavy afternoon rain shower Wednesday softened up the course, and the host venue played shorter overall after tournament officials moved up a few tees.

Twenty-three players were at par or better after the first round, a number that is expected to dwindle as the week progresses.

“Today was about as easy as we’ll play it,” said Florida freshman Jorge Garcia (71). “The scores aren’t that low, because it’s just a tough golf course. It’s really demanding on your short game.”

Defending champion Matias Dominguez, who graduated from Texas Tech last month, opened with a 1-under 71 after making three birdies in the last five holes – typically, the hardest part of the course.

“The challenge here is how you’re going to confront the greens,” he said. “They were a little bit softer, and so you could be more aggressive. I’m totally pleased (with 71).” 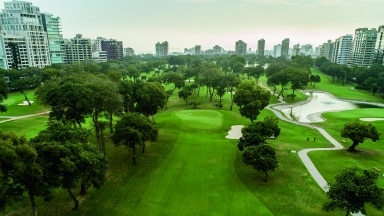 Nicolas Echavarria and Alejandro Tosti each shot 7-under 65s Friday to surge to the top of the leaderboard at the Latin America Amateur Championship.