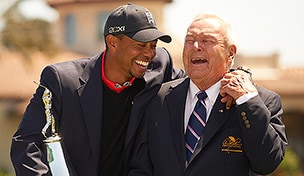 Getty Images
PONTE VEDRA BEACH, FL - MAY 12: Gary Woodland hits a tee shot on the fourth hole during the first round of THE PLAYERS Championship on THE PLAYERS Stadium Course at TPC Sawgrass on May 12, 2016. (Photo by JD Cuban/PGA TOUR)  -

ORLANDO, Fla. – Prior to withdrawing from the Arnold Palmer Invitational, Tiger Woods called the tournament host to send his regrets.

Palmer maintained that Woods didn’t clue him in as to how bad the injury might be.

“I don't think he knows how bad his back is,” he explained. “I think he's listening to the doctors. And he mentioned that they're saying that he needs to give it a bit of a rest and see if he can work it out. He was very nice.”

On Tuesday afternoon, Woods posted the following to his website: “I personally called Arnold today to tell him that, sadly, I won't be able to play in his tournament this year. I would like to express my regrets to the Orlando fans, the volunteers, the tournament staff and the sponsors for having to miss the event. Unfortunately, my back spasms and the pain haven't subsided. It's too early to know about the Masters, and I will continue to be evaluated and work closely with my doctors. I feel badly that I won't be able to play in this great tournament this week.”