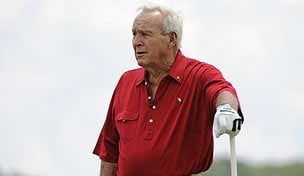 Getty Images
SINGAPORE - FEBRUARY 28: In-Kyung Kim of South Korea hits her second shot on the 4th hole during the final round of the HSBC Women's Champions at Tanah Merah Country Club on February 28, 2010 in Singapore, Singapore. (Photo by Andy Lyons/Getty Images)  -

On Wednesday, he talked about the recently removed iconic tree.

“I played Augusta every year since that tree was a baby and I watched it grow up,” Palmer said with a laugh. “And, yes, I had encounters with it. I won the Masters one year when I hit it right into the tree and hit a 4‑iron from under the tree on to the 17th green. So it was a problem to everybody.”

“I played a lot of golf at Augusta with Ike,” he said of the 34th president. “And of course he hated that tree. But he was a soft spoken guy and a president who was very enjoyable. And he didn't like the tree at all. A couple of times he told me, he said, ‘Arnie, if I could hit that tree enough to bring it down, I'd do it.’ And that's in fun.”

Palmer knows firsthand that Eisenhower wasn’t the only one to become frustrated by the tree.

“The tree was a hazard, no question about it. It was a hazard to the professionals playing and particularly in recent years. In the early years it wasn't so much. I used to just whip it right over the tree. I didn't think much about it in the earlier years. But now it's gone. What are they going to do? I have no idea. No one has called and said, ‘Arnie, what do you think we should do?’

“They could probably put another tree in there. I certainly think that Augusta has done more astounding things than just moving a tree. I'll be interested to hear and see what they are going to say about it when I get there.”