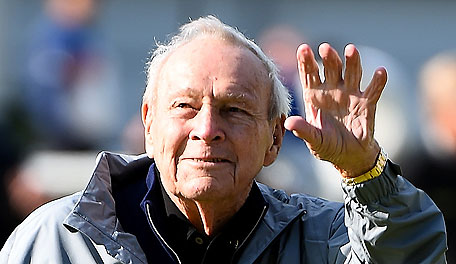 ST. ANDREWS, Scotland – Arnold Palmer made an appearance at the Old Course on Wednesday to captain his team in the annual Champion Golfers’ Challenge, a four-hole exhibition that pits former Open champions against each other in four-person teams.

Palmer stepped on the first tee and declared “I’m going to hit this and it will be my second shot this year.” His first came at the Masters three months ago alongside Jack Nicklaus and Gary Player.

Although Palmer didn’t hit another shot, the King’s team of Darren Clarke, Paul Lawrie and Bill Rogers took home the victory. They were tied at 3 under par with teams captained by Tom Weiskopf, Peter Thomson and Tony Jacklin, but Palmer’s team was declared the winner because it had the highest average age. The other teams were captained by Gary Player, Bob Charles and Tom Watson.

Tiger Woods was grouped with longtime friend Mark O’Meara and Nick Price on Weiskopf’s team. Phil Mickelson and Ernie Els joined Ben Curtis on five-time Open champion Thomson’s team. The highlight for Team Thomson came on the final hole when the 85-year-old captain opted to hit driver off the deck from the middle of the 18th fairway.

Each team stopped for a photo on the iconic Swilcan Bridge on the 18th hole.

At the end of the tournament, the scores didn’t matter but about $150,000 was awarded to Palmer’s team and will be donated to a charity of their choice.