Park 3 back in bid for missing major 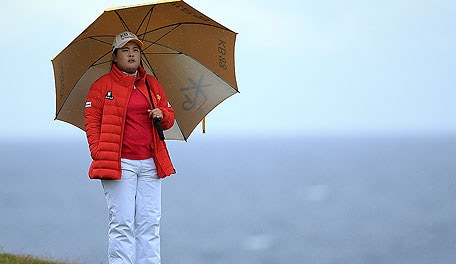 TURNBERRY, Scotland – Rolex world No. 1 Inbee Park is close to the prize she covets.

With a 3-under-par 69 Saturday, she moved into contention at the Ricoh Women’s British Open, where a victory would give her the fourth piece in the career Grand Slam she seeks. She’s three shots behind Jin-Young Ko and Teresa Lu.

Park has won three KPMG Women’s PGA Championships, two U.S. Women’s Opens and the ANA Inspiration. She also won the Evian Championship before it was a major.

“It’s just great that I get somewhat of a chance, instead of sitting at 3 or 4 over par,” Park said. “Having somewhat of a chance the last day was just a great opportunity.  I get another crack at it.  You just keep cracking and someday it's going to crack. That's what I'm trying to do, just give it a try every time. That’s all I can do is play good golf, and maybe enjoy one more day of Scotland.”

“It’s the last piece in the puzzle for her, and she knows she can win it,” Beecher said. “She’s been close so many times. She was right there last year and not winning really hurt.”

Park took the lead into the final round at Royal Birkdale last year but struggled coming home in heavy winds and ended up finishing fourth. She finished second at Royal Liverpool in 2012 and has four top-10s in the last five Women’s British Opens.

Beecher sees how Park’s game fits links golf. She has a marvelous short game, is one of the best putters in the history of the women’s game and ...

“She has that low ball flight,” Beecher said. “She can keep her shots down, under the wind, and that’s huge.”