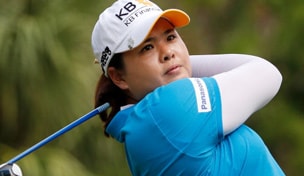 Rolex world No. 1 Inbee Park will be going for back-to-back victories when she tees it up in Thursday’s start of the JTBC Founders Cup at J.W. Marriott’s Wildfire Golf Club.

Park, who won six LPGA titles last year, three of them major championships, has made three worldwide starts so far this season. She has a win, a second-place finish and a tie for fourth.

“I probably haven’t putted quite as good as last year these last three weeks, but my ballstriking, my physical [game] is better,” Park said. “I think I’m mentally a bit stronger, especially from the victory two weeks ago. I feel a lot more confident, and I feel good about this season.”

Park has held the No. 1 world ranking for 49 consecutive weeks. She won her last start, beating world No. 2 Suzann Pettersen head to head in the final round of the Mission Hills World Ladies Masters on the Ladies European Tour.

Typically, Park trains in the Los Angeles area in the off season. She moved to the Gold Coast of Australia to train before this year opened.

“I trained a lot,” Park said. “I feel like I’m striking the ball a little bit better than last year, and probably hitting it a little farther.”