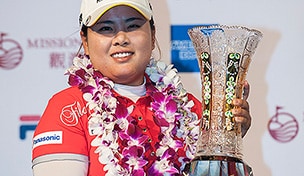 Getty Images
AUSTIN, TX - MARCH 27: Rafa Cabrera-Bello of Spain plays his second shot at the 14th hole in his match against Louis Oosthuizen during the semifinal round of the World Golf Championships-Dell Match Play at the Austin Country Club on March 27, 2016 in Austin, Texas. (Photo by David Cannon/Getty Images)
-

Rolex world No. 1 Inbee Park might have put that thought in the heads of her fellow pros after she outdueled No. 2 Suzann Pettersen Sunday to win the World Ladies Championship in convincing fashion in Haikou, China.

Starting the final round tied with Pettersen, Park won the Ladies European Tour event in a five-shot runaway, posting a 6-under-par 67 on a damp, drizzly day at Mission Hills’ Blackstone Course. Pettersen closed with a 72.

It’s Park’s first victory in eight months, since she won the U.S. Women’s Open last June. The win helped Park open a more comfortable lead again in the world rankings on Pettersen, who has been closing in hard since last fall.

“Everything seems to be working quite well for me, from ball striking to putting,” Park said. “I’m just happy to be here and win my first tournament of 2014.”

Park won six times in 2013, including the year's first three major championships, but she endured disappointment at Mission Hills a year ago, watching Pettersen overtake her in the final round to win.

“I knew that I left something out there last year, so coming back this year I definitely wanted to win, and that's what I just did,” Park said.

Park birdied the first two holes Sunday to get off to a strong start.

“Inbee played fantastic today under a little tougher conditions,” Pettersen said. “There were a few extra elements of weather that we hadn't seen earlier, but I feel like I played average, nothing better.”