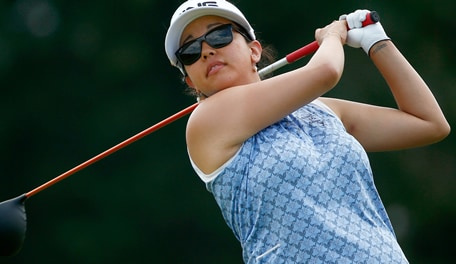 LANCASTER, Pa. – Jane Park made the most of her early tee time to grab a share of the lead in Friday’s completion of the suspended first round of the U.S. Women’s Open.

Park was among 55 players back at Lancaster Country Club at 6:45 a.m. ET, and she didn’t waste any time regaining the momentum she built on Thursday. Park hit a 5-iron to 15 feet upon her return Friday morning and holed the putt for birdie, moving to the top of the leaderboard with Karrie Webb and Marina Alex.

“Great way to start off the day,” Park said.

Park made four pars the rest of the way to close out a 4-under-par 66. Webb and Alex shot their 66s before thunderstorms suspended play Thursday afternoon. Park won the 2004 U.S. Women’s Amateur and was low amateur, tying for 10th, at the 2006 U.S. Women’s Open.

Na Yeon Choi wasn’t quite as sharp coming back Friday morning, bogeying her 16th hole, but she bounced back with a closing birdie. She headed into the second round one off the lead along with Amy Yang.

“I finished strong,” Choi said. “Everything was great, especially my putting.”

Inbee Park birdied the 16th Friday morning to get within a shot of the lead but dropped a shot with a bogey at the 17th. She’s among eight players who finished the first round two shots off the lead. Morgan Pressel’s also in that group.

“It’s a good score,” said Inbee Park, who is seeking to win her sixth major in the last 13 played. “Under par is always good.”

Sixteen players finished the first round under par, including Stacy Lewis, Paula Creamer and Azahara Munoz, who all shot 69s. Lydia Ko and 17-year-old Brooke Henderson were among players at even par. Defending champion Michelle Wie opened with a 2-over 72. Digging themselves first-round holes were Suzann Pettersen (79), Ariya Jutanugarn (79), Caroline Hedwall (80), Natalie Gulbis (81) and Jessica Korda (81).