Park trying to hang on for first S.Korean POY award 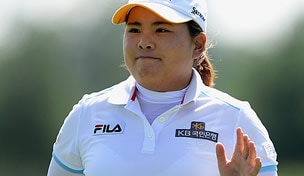 Getty Images
VIRGINIA WATER, ENGLAND - MAY 29: Johan Edfors of Sweden in action during the final round of the BMW PGA Championship at the Wentworth Club on May 29, 2011 in Virginia Water, England. (Photo by Richard Heathcote/Getty Images)  -

Rolex world No. 1 Inbee Park is back in action for the first time in three weeks looking to clinch becoming the first South Korean to win Rolex Player of the Year.

Park tees it up Thursday at the Lorena Ochoa Invitational in her first start since tying for 28th at the LPGA-KEB HanaBank Championship.

Given South Korea’s domination of the women’s game, it’s notable no player from that country has been the LPGA’s Player of the Year.

“For the game of golf in Korea, it would mean so much, I think that’s why I have to really try to push myself.”

Unlike the PGA Tour’s vote, the LPGA Rolex Player of the Year is decided by points. Park leads the POY points list with 290. Suzann Pettersen is the only player who has a chance to catch Park in the final two events of the year. Pettersen has 252 points.

Pettersen must win one of the final two events and at least tie for third in the other to have a chance to overtake Park. A win is worth 30 points in each of the last two events with second place worth 12 points and third worth nine. Points are awarded down to 10th place.

“Not winning anything, not winning any awards after this kind of year, would be a little bit disappointing, a lot disappointing,” Park said. “I think I want to give it a best try, and I’d be glad after this year, so that’s what I am trying to do. Whether I achieve it or not, I am just going to try my best, so I don’t regret.”

Park won the U.S. Women’s Open in late June for her third consecutive major championship title, her sixth LPGA title of the year, but she seemed to run out of gas in her bid to win a fourth straight major at the Ricoh Women’s British Open. Since that U.S. Women’s Open victory, Park has one top-10 finish in eight starts.