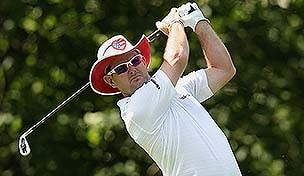 Getty Images
JEJU, SOUTH KOREA - APRIL 24: Robert - Jan Derksen of The Netherlands plays his tee shot on the 16th on the third hole during the second round of the Ballantine's Championship at Pinx Golf Club on April 24, 2009 in Jeju, South Korea. (Photo by Stuart Franklin/Getty Images)  -

But the Champion Course, above all, still places on a premium on crisp ball-striking and hot putting, and few know that better than Rory Sabbatini, the 2011 champion here.

The fiery South African, who has just a pair of top 25s in 10 starts this season, made seven birdies Thursday during a 5-under 65 that gave him a share of the early lead at the Honda Classic.

“I think any time you can come into this golf course and shoot under par,” he said afterward, “you’re walking away a happy camper.”

Speaking of happy, Sabbo says he’s trying to get back to enjoying golf again. He believes that he’s getting into a “healthier situation with my personal life,” a nod to his recent divorce that played out (rather messily) on social media. He wants to eliminate stress and focus on what he’s doing between the ropes.

To that end, he’s hopeful that his opening 65 will lead to another good result at PGA National.

“We’ve been continuing to do some work on the swing, trying to just tighten things up,” he said. “For a little bit, I got a little bit lost in it, so now it’s starting to all kind of sink back in together.”