CBS golf analyst Dottie Pepper recently shuttered her Twitter account after receiving online criticism for a mistake she made during an on-air interview at the Zurich Classic of New Orleans.

Pepper was interviewing Scott Brown and Kevin Kisner during a lengthy rain delay that interrupted the final round. She began with a question to Brown, with the pair clinging to a one-shot lead at the time.

"You've never really been in this position before," Pepper said. "Your partner Kevin has been in position to win golf tournaments and has gotten it done. You have not yet on the PGA Tour. Where's the anxiety level?"

Brown tied for second at the Genesis Open earlier this year and alerted Pepper to the fact that he also won the 2013 Puerto Rico Open. Pepper then qualified her point by adding "full-field, regular event." Brown and Kisner went on to lose a playoff to Cameron Smith and Jonas Blixt.

The interview clip quickly spread online, and Pepper told SB Nation that she decided to pull the plug on her social media account based on the negative reaction she received.

"Tired of the idiots," Pepper said. "It is suspended by my own doing; can stay in that status for a year." 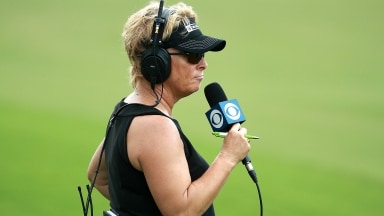