Pettersen dreams of being No. 1, not focused on it 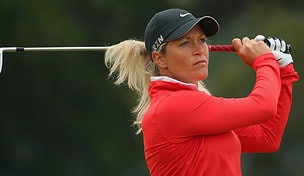 Getty Images
CROMWELL, CT - JUNE 26: Bubba Watson putts on the 13th green during the second round of the Travelers Championship at TPC River Highlands on June 26, 2015 in Cromwell, Connecticut. (Photo by Jim Rogash/Getty Images)  -

PHOENIX – Suzann Pettersen stumbled upon an old diary at her Orlando home this winter.

It was actually a sort of hybrid diary/scrapbook from her youth growing up in the Norwegian golf federation, a compilation of personal notes, photos and clippings and even detailed analyses of her game. It sits on a bookshelf at her home, but she dug it out to show youngsters visiting her from Team Norway. She estimates she was 12 and 13 when she worked the most on it, and she found reviewing it both embarrassing and inspiring.

“It’s heavy, it’s big,” Pettersen said. “I must have spent a lot of time doing this. It was a way to express my thoughts and dreams . . . I was so into it. I wrote how I wanted to be the best player in the world. I wrote about how I wanted to win majors.”

Looking through that diary in January, it occurred to Pettersen that she has already achieved all the ambitions of her youth, except one.

“The only one remaining on that list that I haven’t achieved is to be the best player in the world,” Pettersen said. “I guess there’s a dream inside of me that kind of is still very much alive, but it’s not something I run around and think about every day.”

Pettersen is No. 2 in the Rolex world rankings behind Inbee Park. Pettersen has never been No. 1 but has lurked within striking distance of passing Park since late last fall.

“I feel like I’ve been in this position before, but this is the most comfortable I’ve been,” Pettersen said.

“It sounds harsh, but I really don’t care about the rankings,” Pettersen said.

Pettersen’s funny that way. She aches for the No. 1 ranking, but she understands focusing on it won’t help her get there. So, she’s focusing elsewhere to get there.

“If you sit and think about it, you’ll go crazy,” Pettersen said. “I just want to see how good my game is and how good it can be.”