Pettersen can overtake Park for No. 1 with win 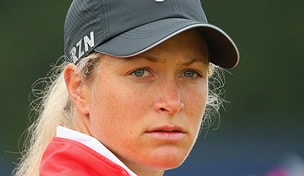 Getty Images
CROMWELL, CT - JUNE 26: Hunter Mahan plays his shot from the 12th tee during the second round of the Travelers Championship at TPC River Highlands on June 26, 2015 in Cromwell, Connecticut. (Photo by Jim Rogash/Getty Images)  -

PHOENIX – Suzann Pettersen has another chance this week to overtake No. 1 Inbee Park in the Rolex Women’s World Rankings, but she will have to win the JTBC Founders Cup to do so.

Pettersen gets asked pretty much every time she plays now about the possibility of rising to No. 1 for the first time in her career.

She’s being asked again this week.

“I feel like I’ve been in this position before, but this is the most comfortable I’ve been,” Pettersen said.

Pettersen has been No. 2 behind four different players in her career. She’s been in the rear-view mirrors of Annika Sorenstam, Lorena Ochoa, Yani Tseng and now Park.

With a hot second-half last year, Pettersen carved into Park’s giant lead in the world rankings. Pettersen has had a chance to overtake Park in her last five starts but has been unable to do so. Park beat her head to head in a final-round pairing two weeks ago at the Mission Hills World Ladies Masters.

If Pettersen wins this week, she will overtake Park as the new No. 1, no matter how Park finishes. Only a victory, however, gets Pettersen to No. 1.