The 97th PGA Championship takes place this week at Whistling Straits Golf Course in Sheboygan, Wis. GolfChannel.com is tracking the men's final major of the season through on-site reporting and social media. For additional coverage, click here for full-field scores. You can also check out our Day 2 blog here and all the action from Day 3 here. All-times for the PGA tracker are Eastern Daylight Time (EDT).

Jason Day is your 97th PGA champion. His 20-under total is the lowest score to par in major championship history. pic.twitter.com/mzKRZagbTZ

7:07PM: Day and Spieth both hit the 18th green. Day enjoying the walk down the 18th fairway.

Jason Day walks to the 72nd tee with a three-shot lead. A par gives him the PGA Championship and the lowest ever score to par in a major.

World No. 1 watch: If Jordan Spieth stays where he is right now - he's in solo second by two - he'll pass Rory McIlroy.

5:51PM: And almost as if Spieth is following this blog, he drains the birdie putt. Day makes his par, and Spieth moves into solo second, just three back with five to play.

5:48PM: Spieth certainly hasn't given up on the tournament, but with Rory's closing 69, here's what he has to do to take the world No. 1 crown.

5:45PM: Day and Spieth both find the green on No. 13. Advantage Spieth on the hole. Advantage Day on the round.

5:37PM: Ridiculously tough sand shot for Day and he gets it to a couple feet from the hole. Spieth misses his putt and we have a couple of pars. Rose makes an untimely double-bogey 6 on No. 13. Looking more and more like Day's major to lose.

Day goes 4 up with six to play. Not a lock yet, but he’s certainly inching in that direction.

5:32PM: Advantage Spieth on the par-3 12th. Looking at a makeable putt from the fringe while Day finds a deep bunker. Rose finds sand on No. 13, and barely gets it out. Could get messy.

5:27PM: Rose misses his third straight birdie by about an inch on No. 12. Spieth executes a great chip out of the rough but misses the birdie putt and has to settle for par. Day makes the casual two-putt birdie and gets back to that historical 19-under par.

5:19PM: Spieth goes for the par-5 11th hole in two. Yells at his ball to "go hard!" but his ball doesn't listen, hits something and takes a 90 degree turn left and into the thick stuff. Day meanwhile looking at about 40 feet for eagle.

5:15PM: Then there's the curious case of Justin Rose. Playing in the second-to-last group, he spins a perfect wedge into No. 11, makes the putt for his second birdie in a row. Just two behind Day.

Watch: Justin Rose moves to 16-under with birdie at 11 Scores: http://t.co/MrB8NpflrZ http://t.co/FIRzwrlEi6

5:08PM: Jordan Spieth with the much needed birdie on 10. Day makes a par and still sits three up.

Jordan Spieth joins Justin Rose in second place at 15 under with a birdie at No. 10. Pretty wedge. Very pretty.

5:03PM: In case anyone was wondering what happened to Dustin Johnson today. Wonder no more.

After opening with a quadruple bogey, Dustin Johnson just got back under par in his final round: pic.twitter.com/eqbAkMDo59

4:55PM: Day recovers with great up-and-down for par. Spieth makes bogey. Justin Rose, who we haven't heard much from today, makes a birdie on No. 10. Suddenly, Day leads by three, but over Rose. Spieth and Grace both four back. Could be the turning point.

Spieth's bogey and Grace's double drop them to four back. Day heads to the final nine with a three-shot lead over Justin Rose.

4:50PM: Grace, playing a hole ahead, does the exact opposite. Makes way too good of contact and blasts it across the 10th green. Then chip lands short and it comes right back to him. Could be the end for him.

4:45PM: And suddenly Day is struggling. Hits approach on No. 9 as fat as a Tour pro can hit it, comes up way short of the green.

4:35PM: Day's first blemish of the round comes at No. 8. Drive finds the sand and he's forced to punch out. Saves a bogey. Spieth can't capitalize, makes par.

Bogey at No. 8 drops Day back to 18 under. The lead is now two. That's his first dropped shot since he made double yesterday at 15.

Jason Day is on a mission. http://t.co/ID5J1SiCLq

4:14PM: For the second straight hole, Spieth and Day match each other with birdies. Day to 18 under. Spieth to 15 under. Day's lead is back to two. Heads are spinning. Dogs and cats are living together.

4:10PM: Branden Grace has birdied four of his last five holes, including his last three in a row. He's just one behind Day.

4:00PM: Jordan Spieth just walked in a birdie putt at the par-5 fifth. And Day answered. Spieth tied with Grace at 14 under, but Day's lead remains three.

3:46PM: Scratch that. Grace now in solo second after a birdie bomb at the par-5 fifth. And Rose is level with Spieth in third at 13 under. Live golf, people.

3:44PM: While the focus is on the final pairing, Spieth is actually tied for second with Branden Grace at 13 under. Grace is 1 under today after a birdie at No. 3.

3:42PM: And back and forth we go. Day started with a two-shot lead, then led by three, then by two, and now three again after a bogey by Spieth at No. 4. Spieth found a bunker off the tee and couldn't save par. Now 13-of-15 scrambling this week.

Remember that quad start for Dustin Johnson? Well, he’s played four more holes since and hasn’t made a par. pic.twitter.com/wxZdQtFgcf

3:27PM: Jordan Spieth cuts the margin to two shots with a birdie of his own at No. 3. Used the contouring right of the green to bounce his ball within 10 feet of the flag. Day at 16 under. Spieth at 14 under.

3:23PM: Dustin Johnson opened Sunday 4 over through one hole, when he needed five swings to find the green from over the back.

3:15PM: Day takes a three-shot lead over Spieth with a birdie at the par-5 second. Spieth's birdie try just slid by on the left edge.

3:10PM: Good look at what may or may not be in store for Jordan Spieth and Jason Day this afternoon:

Seems worth a refresher of the world No. 1 scenarios. pic.twitter.com/CJXRoJHSDZ

Jason Day is due. No player in the modern era has had the 54-hole lead or co-lead in three straight majors and not won any of them.

3:02PM: In case you missed it, here's the full recap of Bubba Watson's debate with a rules official over the classification of ants as a "burrowing animal." The transcript is rich.

2:57PM: A pair of pars for Day and Spieth on the opening hole. Day continues to lead by two.

Jack became youngest in modern era to win 3 majors at 1963 PGA - he won it in Jordan Spieth's hometown of Dallas. #PGAChamp

2:45PM: Game time! Jason Day and Jordan Spieth have teed off in the final round of the PGA Championship.

2:36PM: So much for a Dustin Johnson comeback. Myriad bunker problems on the first hole led to a quadruple bogey-8 at the par-4 first. At least the disaster occurred early on Sunday this time.

Yes, that’s correct. Dustin Johnson is 4-over after the first hole. #quad pic.twitter.com/Ndiy6zvpQQ

2:30PM: And then there is Phil Mickelson doing this:

2:27PM: Back on Planet Bubba, this is happening:

2:15PM: As the final groups set out at Whistling Straits, a reminder that winds are expected to be steady at 10-15 mph, with gusts up to 25 mph. Temperatures are in the low 90's.

2:05PM: This has to be the last player Jason Day wanted to have to stare down on Sunday.

Jordan Spieth just never goes away. Here's his position after each major championship round. #grinder pic.twitter.com/T78NKmrHQZ

1:57PM: Brian Gaffney shot 1-under 71 in the final round to finish at 6 over par. He was the lone club pro to make the cut and managed to finish ahead of a few weekend pros, including last week's Barracuda champion, J.J. Henry.

"As a player you try to suppress your feelings. But towards the end, I couldn't hold it in." Brian Gaffney. #PGAChamp pic.twitter.com/FGK4MfeL6f

1:45PM: T-minus one hour and counting until the final pairing of Jason Day and Jordan Spieth conclude the major season.

1:41PM: Steve Stricker won't win this week, but he's given the locals something to cheer about early Sunday. He's 5 under on the day, 7 under for the event. He's currently T-14, with the top 15 earning an invite to next year's PGA at Baltusrol.

1:33PM: Rickie Fowler finding birdies on Sunday at Whistling Straits. Three of them on the scorecard through his first eight holes: 1:22PM: Because the Tiger Woods-Jordan Spieth comparisons never get old.

If Jordan pulls off a come-from-behind victory at the #PGAChamp, let the debate begin. pic.twitter.com/zDTdRKtDsq

Bubba Watson Yells "Ow, It Bit Me" Before Hitting Out of an Ant Hill at the PGA Championship https://t.co/1fciD5yE4b https://t.co/WAXuJ58Oh6

1:14PM: A world without Photoshop is not a world in which I wish to live. And if you don't know what this image is referring to, please see our live blog entry from 12:38 p.m.

1:12PM: World No. 1 Rory McIlroy (wonder if we'll still be calling him that tomorrow - here's looking at you, Jordan) is next up:

This bombed drive from Bubba led to eagle on the par 4 sixth. #SapphireOnLocation #PGAChamp http://t.co/BsjLfZ38XU

12:48PM: Good news! Less than two hours until this dynamic duo tees off for their final romp around Whistling Straits.

12:45PM: After all that burrowing animal hubbub, Bubba made birdie at the par-5 fifth and is 2 under for the championship.

12:38PM: Animal instincts. Bubba Watson going back and forth with a rules official about getting relief from an ant hole on the par-5 fifth hole. The ruling was that Watson would not receive relief, which didn't please Bubba too much. "If someone were allergic to ants and their ball landed there, you could care less," Watson said to the official. Perhaps he's a little more peeved than he might otherwise be, because he went bogey-bogey to begin his final round. 12:06PM: Here's a look at the hole locations for the final round:

The wind is expected to pick up in the afternoon, just as the leaders tee off. Here's final-round hole locations. pic.twitter.com/WuN8wakaiq

12:00PM: Who do you think will win the 97th PGA Championship? Our GolfChannel.com writers made their picks:

11:50AM: Happy PGA Championship Sunday! When play ended Saturday, here's what the final leaderboad looked like. Jason Day and Jordan Spieth tee off in the final pairing at 2:45 p.m. ET. 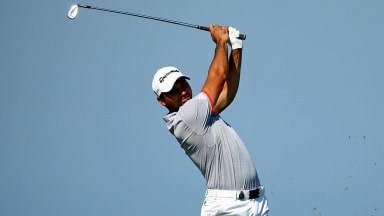 Jason Day and Jordan Spieth stole show on Saturday at the PGA Championship. 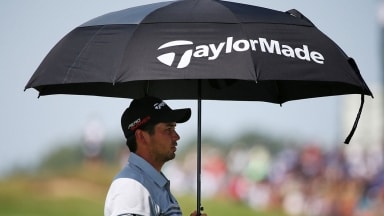 Round 2 of the PGA Champ. has been suspended until Saturday morning at 8 a.m. ET 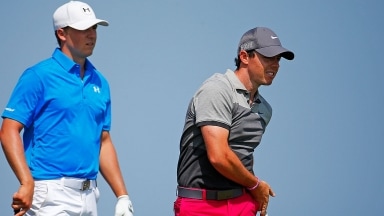 Jordan Spieth and Rory McIlroy both opened with 1-under 71s on Day 1 at Whistling Straits.