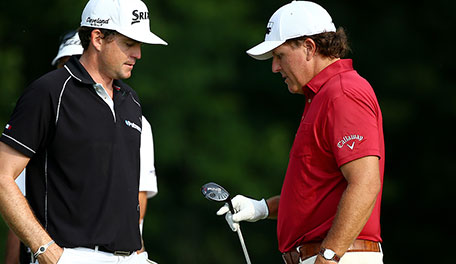 SCOTTSDALE, Ariz. – Phil Mickelson and Keegan Bradley have a friendly rivalry – especially when it comes to who can hit the ball longer.

On Wednesday, they took that rivalry public, each one telling a story in his separate pre-tournament news conference at the Waste Management Phoenix Open that reeked of good-natured trash talk.

“When I outdrove him today by 30 yards,” Bradley said with laugh, “I left him a note in the fairway, letting him know, ‘The senior tees are not that far off, don't get too worked up about it.’”

In response, Mickelson pointed to a charity event they each played last week as proof he could still bomb it past his younger peer.

“Keegan and I had a long-drive contest,” he explained. “I flew it by him 25 yards. I have gotten a lot more speed in the offseason. That really bothered him. So the 14th hole is a dogleg right to left. I guess he really hammered one. I had not played the hole before. I just hit a little stock cut just to comfortably cut out there. He was 11 yards by me. If that's what it takes to stroke his ego, then that's what it takes. Had I known that he was going to make a big deal about it, I would have swung a fraction harder and put it past him.”