ST. ANDREWS, Scotland – It was quintessential Lefty on Monday at the Open Championship – complete with an enormous deficit, an early charge and ultimately, a spectacular mistake.

Phil Mickelson teed off at the Old Course eight shots out of the lead, but rallied with an opening nine of 33 and added three more birdies at the 10th, 14th and 15th holes to move to 10 under par and just two shots off the lead.

At the famous Road Hole, however, his title hopes sailed right with the wind, caromed off the Old Course Hotel and came to rest on a balcony overlooking the 17th fairway.

“I've tried hitting shots from some crazy places. I don't know if I would have climbed up to do that, I don't know,” said Mickelson, who would make a triple-bogey 7 on the hole and finish his week at 7 under par.

Mickelson played the 17th hole in 5 over for the week, including bogeys in Rounds 1 and 3, and was 12 under on the other 17 holes for the tournament.

“It was a good late move. The front nine I let a lot of shots go. I had a lot of opportunities I just couldn't capitalize on,” Mickelson said. “Then I tripled 17. But the good news for me is that as I stood up there, I trusted the swing. I hit a good, solid shot. It just over-drew a little bit.”

Mickelson’s next start will be the WGC-Bridgestone Invitational prior to the PGA Championship. 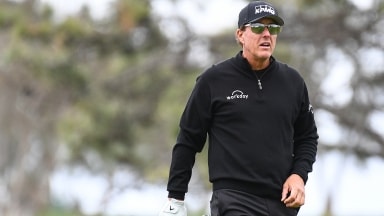 After hail storm, Phil birdies out to make cut

A hail storm halted play in Friday at the Farmers Insurance Open and when Phil Mickelson returned, he made birdies.