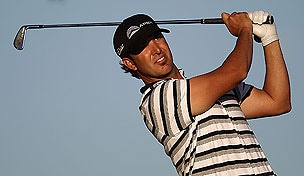 Scott Piercy will miss the next 3-4 months after undergoing surgery this week to repair the flexor tendon in his right elbow.

The 35-year-old has been dealing with the form of “golfer’s elbow” since last May. He was first examined in July and given a cortisone shot. After a fifth-place showing at the PGA, a second MRI revealed the frayed tendon.

Piercy was able to compete at last week’s WGC-Match Play Championship, where he lost to top-seeded Justin Rose in the opening round. But afterward, he said, “I’ve never felt so much pain in my life,” according to a release from his management team at Lagardere Unlimited. A day later, it was revealed that the tendon had separated from the bone.

Piercy, whose two PGA Tour victories include the 2012 Canadian Open, had just two top-25 finishes in nine starts this season.