Play suspended at the Open because of high winds 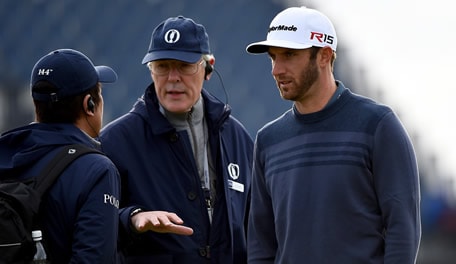 ST. ANDREWS, Scotland – The resumption of play lasted only about a half hour Saturday, when gusts of up to 40 mph forced another suspension of play at the Open Championship.

Rare flooding was the big issue Friday at St. Andrews, when the second round was delayed by more than three hours as the maintenance staff squeegeed the greens and pumped standing water out of the fairways.

This was even worse, with howling winds that made putting even more difficult than full shots.

“You’re standing over a putt wondering if the ball is going to roll into your putter,” Brendon Todd said. “That’s an unnerving thought.”

Leader Dustin Johnson discovered that quickly Saturday morning. Electing to pitch the ball from just in front of the 14th, his shot came up well short and drifted all the way back to the front of the green. Three putts later, he dropped back into a share of the lead after his second bogey in four holes.

Johnson and Jordan Spieth, who is at 5 under, have three holes remaining in their second round.

"Shouldn't have even started," Spieth grumbled as he walked off the course.

In one of the morning's stranger scenes, Louis Oosthuizen, only two shots off the lead, was looking at 3-footer for par on 13 when a gust of wind moved his ball about a foot from the hole, then about 6 feet past the cup.

In a statement, the R&A said that officials was on the course at 6 a.m. to assess whether the course was playable. “Balls were not moving on the greens and while the conditions were extremely difficult, we considered the golf course to be playable,” the organization said.

Wind gusts then increased in speed by 10 to 15 percent, the R&A said, “and this could not be foreseen at the time that play was restarted and made a material difference to the playability of the golf course.”

“Bit of a strange decision here @TheOpen,” Lee Westwood tweeted. “They seemed to stop play out on 11 and allowed the rest of us to carry on playing.”

Interesting, because it was the 11th green that caused a suspension of play during the 2010 Open here. The slope on the green has since been softened, and Peter Dawson, the chief executive of the R&A, told the Scotsman newspaper, “What we have now is a green that will still be puttable in high winds.”

Prior to the 2010 Open, the last wind delay during the year’s third major was at Royal Birkdale in 1998, when gusts reached 40 mph.

Tweeted Ted Scott, Bubba Watson’s caddie: “Every R & A official in player dining is getting yelled at. Lots of players pissed in here. #GaleForceWinds #StAndrews I love this place!!”

At 2012 Women’s British Open at Hoylake, they played for an hour in 60-mph winds before play was suspended. Following the delay, scores were declared null and void and players started their rounds over when the weather cleared. According to one official, the second-round scores here will stand.

Play was suspended at 7:32 a.m. local time, and players were driven back to the clubhouse in vans.

Thirteen groups have yet to finish their second round – the last three-ball is on the ninth hole – and there is no update as to when play will resume. It was announced Friday that the third round will be played in threesomes.

During the third round of last year's Open, officials went to a two-tee start for the first time in tournament history. That might be necessary to get back on schedule and avoid a Monday finish.