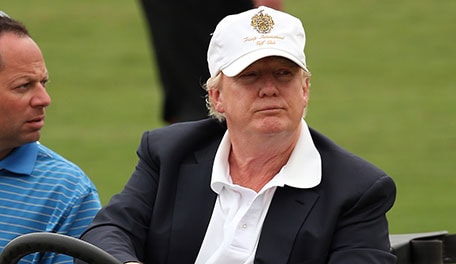 TURNBERRY, Scotland – Donald Trump’s arrival promises to stir the air at Trump Turnberry, even after his helicopter touches down on the helipad for Thursday’s start of the Ricoh Women’s British Open.

Trump, who owns the golf course and the upscale hotel on the property, is expected to be on the grounds Thursday morning, according to championship officials in contact with Trump’s staff.

With Trump’s controversial comments about illegal immigration from Mexico creating issues for golf’s governing bodies, who partner with Trump as host of multiple venues, there’s been friction, particularly with the LPGA. After the LPGA released a statement three weeks ago suggesting it would prefer the Women’s British Open be played somewhere other than Trump Turnberry, Trump fired back at LPGA commissioner Mike Whan with strong language, accusing the commissioner of lacking “common decency” and offering to allow the Women’s British Open out of its contractual commitment.

Whan told GolfChannel.com that he had a conversation with Trump after Trump’s letter, but he preferred to keep the dialogue private.

“I don’t really want to get into that,” Michelle Wie said. “I think it really distracts us from the great tournament that we have this week. I’m extremely honored to be here.”

Karrie Webb believes it’s important women get to play historic venues that they’ve not been given chances to play in the past. She won at Turnberry in 2002 and appreciates the history there.

“I just don’t think we should put politics and golf in the same context,” Webb said. “We’re playing such a great historical venue. Many Open championships and past Women’s British Open championships have been held here. I really just think that’s the focus of the week and really that we just get the opportunity to play on this course.”

Laura Davies also doesn’t like seeing a historic venue like Turnberry put in jeopardy as a potential host of future Women’s British Opens.

“That's up to the commissioner and the board and everybody,” Davies said. “I don't get involved. But if we don't come back here, it would be a real tragedy, clearly, because it's such a great place and a great golf course. And it would be lovely to play it again with the new layout obviously.”