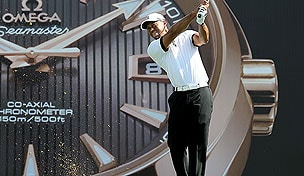 DUBAI, United Arab Emirates – Hole-in-one contests are nothing new in golf, but the folks at the Dubai Desert Classic have taken the concept one step further for this week’s event.

Players will be competing for a $2.5 million prize, in honor of the event’s 25th anniversary, at the 17th hole at Emirates Golf Club. The rub is that the hole is a par 4. The competition will be held on Saturday and Sunday and officials plan to use a forward tee which will make the hole play at about 325 yards.

Tiger Woods attempted to drive the green at the 17th during Tuesday’s Champions Challenge and came up short and right, but the odds against a double eagle haven’t dampened some players' desire to cash in.

“If I’ve got the right wind, especially off the back tee, I’ll go for it,” Rory McIlroy said. “No matter what way the wind is, it shouldn’t be a problem to get there.”

McIlroy was later asked if he’d attempt to drive the green even if he had a three-stroke lead on Sunday.