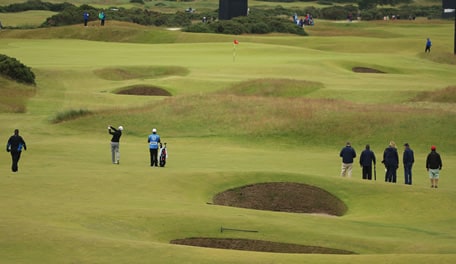 ST. ANDREWS, Scotland – Any hopes of a brown and bouncy Old Course were lost more than a week ago when the venerable links was pounded with heavy rain.

So, yes, the course is softer and more receptive than tournament officials would prefer. Darren Clarke, who has played here for nearly 30 years, said he cannot recall ever seeing the course this green.

The unpredictable weather is the course’s main defense, but the home of golf has been under assault during the past three Opens here, with winning scores of 19 under (2000), 14 under (2005) and 16 under (2010). Rory McIlroy tied the major-championship record with a 63 in the first round here in 2010, and a green, soft Old Course has led some to wonder whether we’ll see the first 62 this week.

“I wouldn’t put it past anyone,” Rickie Fowler said. “If the wind is down, it’s definitely scoreable.”

Dawson said Wednesday that he wasn’t concerned that the 7,300-yard Old Course might not adequately challenge the game’s best players in the future.

“I think the course out there has stood the test of time,” he said. “There are so many subtleties of ground and wind out there that this Old Course will last well into the future as a strong challenge.”