Points began the day one shot behind Chris Stroud but birdied four of his final six holes to rally for the victory. It's the third of his career and first since the 2013 Shell Houston Open.

Points, 40, played off past champion status during the 2015-16 season and had to return to Web.com Tour Finals last fall in order to regain his PGA Tour card. With the win, he's now fully exempt through the 2018-19 season and has spots in the Players Championship, PGA Championship and Tournament of Champions.

"I can't even begin to explain what this means," Points said. "Couple really awful years, I pretty much hit rock bottom. Put my family through a lot. To be able to find the strength and courage to stay calm and win is something I didn't know I had in me."

Goosen snagged the clubhouse lead after a final-round 64, but ultimately came up just short of what would have been his first Tour win since 2009. DeChambeau rolled in a pair of lengthy birdie putts down the stretch to tie Goosen and Bill Lunde at 18 under for his best career finish on Tour.

DeChambeau's previous best came during last year's RBC Heritage, when he tied for fourth in his first start as a professional. 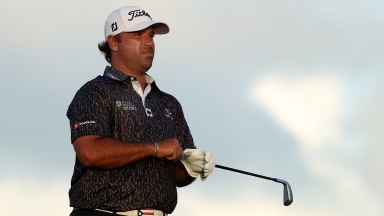