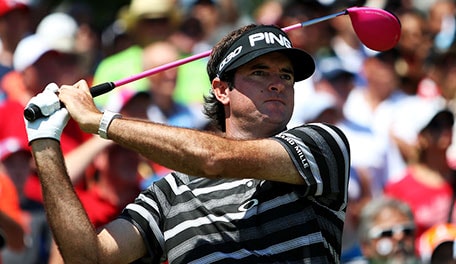 Bubba Watson's approach from 189 yards at the par-5 18th hooked about five feet too far.

Watson, needing an eagle to tie Jason Day, missed the green with his second shot at the 72nd hole and missed out on a potential playoff at the RBC Canadian Open when his wooded putt from the rough missed low.

His Sunday 69 was good enough for solo second, but it also, unfortunately for Watson, followed a pattern that dogged him all week at Glen Abbey Golf Club.

Watson played his first 10 holes 2 over in the final round, making three birdies and five bogeys, and still found himself just two back.

Watson went on to to play his final six holes, a stretch with three reachable par 5s, in 5 under par, putting himself in position for his third PGA Tour victory this year.

Given his track record through the first three days, "I knew there was always a chance," he said. "I was just hoping that the other guy named Jason Day wasn’t making putts."