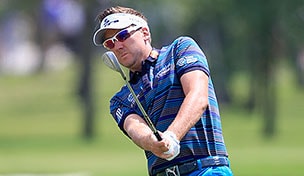 Getty Images
MARANA, AZ - FEBRUARY 23: Jason Day of Australia reacts to defeating Victor Dubuisson of France on the 23rd hole during the final round of the World Golf Championships - Accenture Match Play Championship at The Golf Club at Dove Mountain on February 23, 2014 in Marana, Arizona. (Photo by Sam Greenwood/Getty Images)  -

DORAL, Fla. – Ian Poulter and Hideki Matsuyama will tee off on Saturday at Doral at 11:15 a.m. ET, but the Englishman took some shots at the Japanese player well before that.

Poulter tweeted late Friday night that Matsuyama, “buried his putter in the 13th green 5 feet from the hole. (A) referee had to repair the crater. Because he didn’t.”

Poulter continued: “Why should Matsuyama leave a crater in the green for others to putt over, or have to call a referee to repair the damage. Idiot.”

And finally, “I’m no saint and first to say, but that was disgusting. I wouldn’t bury a putter in a green 5 feet from a hole and have players behind deal with it.”

Update: According to the AP's Doug Ferguson, Matsuyama apologized to Poulter on the driving range Saturday morning. Golfweek's Alex Miceli snapped a photo of the meeting:

Matsuyama came to Poulter on the range to apologize for yesterday's attempt at redesigning the 13th green. pic.twitter.com/D7xQOsbbXJ