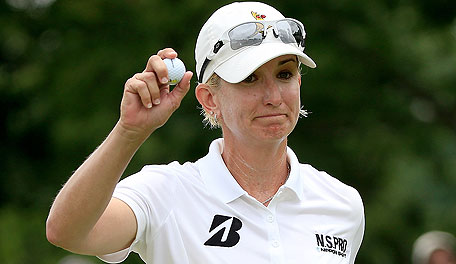 LANCASTER, Pa. – Karrie Webb says it’s way too early to start thinking about the history she could make winning the U.S. Women’s Open this week.

And besides, she doesn’t look at where she stands in the record books anyway.

Know this, though, Webb stands tall.

In fact, if Webb can add another major championship title this week, she’ll move into the company of a giant in the women’s game. If Webb wins her third U.S. Women’s Open, it will be her eighth major title, moving her into a tie for sixth on the all-time list with Betsy Rawls.

With a 4-under-par 66 Thursday, Webb moved into a tie for the early lead with Marina Alex at Lancaster Country Club. Webb hit all 14 fairways and hit every green but one in regulation. That’s a pretty good formula for winning U.S. Opens.

Does history matter to her?

“That is way too early to ask me that question,” Webb said. “Ask me on Sunday.

“Honestly, I could probably guess at who's won more majors, but I can tell you I've never looked. I know Patty Berg has the most, that's probably the number that I know. But that's never been a goal of mine. I'm just happy to get off to a good start and hopefully continue to play this good for the next three days.”

Webb, 40, hasn’t won a major since winning the Kraft Nabisco in 2006, but she has been making hard runs at them. She was in the hunt on the weekend at the KPMG Women's PGA Championship before tying for seventh three weeks ago and finished second at the Evian Championship at the end of last year.

Her game’s giving her chances to win for the 42nd time in her LPGA career.

“It's been a test of my patience,” Webb said. “I feel like I've had some good golf in me. I played well at the KPMG a couple of weeks ago. Inbee just played unbelievable and ran away with it. So I felt good. I hit the ball well there. And I felt good coming into here, just trying not to set the expectations too high, put too much pressure on myself.”