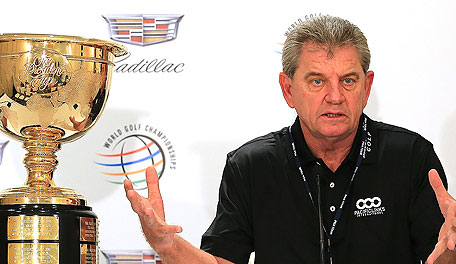 International captain Nick Price will continue to lobby for an overhaul of the Presidents Cup points system when he sits down for a meeting with PGA Tour commissioner Tim Finchem on Wednesday.

Price has argued for years that following the Ryder Cup structure and trimming the total number of points (from 34 to 28) would help make the biennial matches more competitive. The U.S. leads the overall series, 8-1-1, including an 18.5-15.5 victory in 2013.

“I am still optimistic that we will change it, that we will change the points,” Price said in an interview with Reuters on Monday. “I just don’t know by how much. It’s such a huge difference. I don’t think the Ryder Cup would have been as successful if they had the Presidents Cup format.”

Having fewer points available gives the stronger team less of an advantage because the weaker players would not compete as often.

The cutoff for qualifying for the Presidents Cup teams is Sept. 7. The matches will be played Oct. 8-11 in South Korea.