Punch Shot: Best finish of the top 4 at The Open? 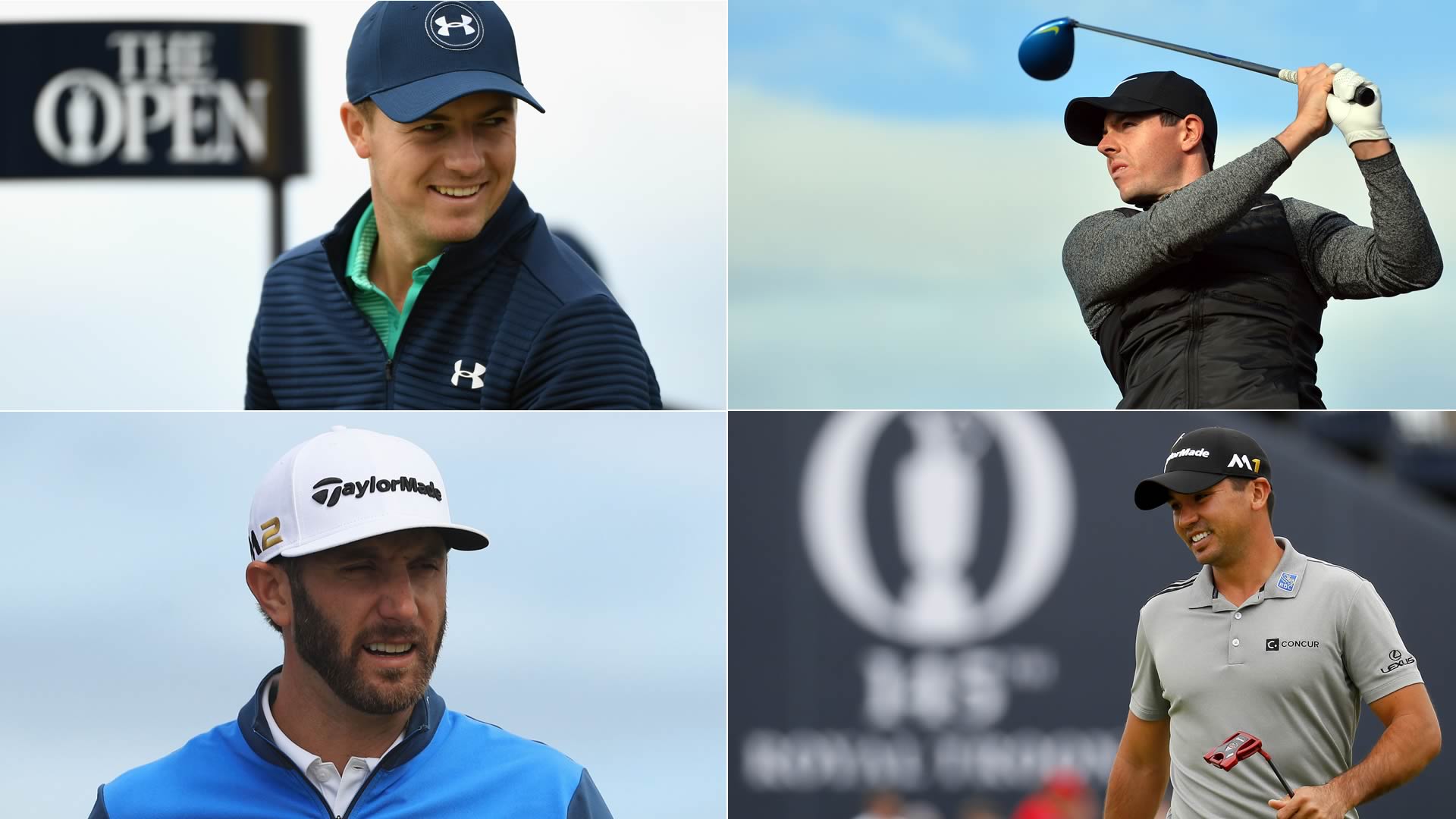 TROON, Scotland – Golf's oldest major returns to Royal Troon for the first time in more than a decade. Less than 24 hours from Colin Montgomerie striking the opening tee shot at the 145th Open, we know that weather is expected to play a large role in the festivities. What else do we know? Read below, as the GolfChannel.com team at Royal Troon weighs in with answers to the following three questions:

Americans have won 41 of the previous 144 Opens including 13 of the last 21. They’ve also won the last six at Troon. Will an American win this week?

REX HOGGARD: Yes. History is on the red, white and blue’s side. Two out of the last three Open champions were American and five of the last six major champions were born in the Lower 48, so it statistically stands to reason that this week’s winner would emerge from the far side of the Atlantic. That the hottest player in the game today, Dustin Johnson, is American also gives the USA an advantage when play begins on Thursday.

RYAN LAVNER: No. The claret jug has gone to the red, white and blue each of the last six Troon Opens, but the hunch here is that trend stops. Sure, it would surprise little if Dustin Johnson continued rolling or Jordan Spieth picked off the major that eluded him last year, but that’s where the strong list of American contenders ends. Will Zach Johnson go back-to-back? History isn’t on his side. Will Phil Mickelson capture another Open? He hasn’t won anywhere in three years. Will Rickie Fowler nab his first major? He hasn’t been a factor in months. There are far better bets among the Europeans (Rory McIlroy, Sergio Garcia, Lee Westwood, etc.) and international contingent (Jason Day, Adam Scott, Louis Oosthuizen, etc.) to predict another U.S. winner.

BAILEY MOSIER: Yes. There are six Americans in the top 15 in the OWGR with The Open defending champion Zach Johnson, Phil Mickelson (who has two runner-ups and an additional three top fives this season) and Jim Furyk not far behind rounding out the top 20. You could make a strong argument for any one of the Americans in the top 20 to win and an even stronger one for them collectively.

MERCER BAGGS: Yes. You won’t get great odds on them at the betting parlors, but Dustin Johnson and Jordan Spieth are too good to pass up. Johnson is coming off back-to-back, big-time wins. Spieth has the short game to work magic around Royal Troon. They might not get a lot of help from the rest of the U.S. contingency, but they should be able to shoulder the load.

JAY COFFIN: No. Dustin Johnson and Jordan Spieth obviously would be the two best options but there are too many others who have a chance to think another American wins. Day, McIlroy, Stenson, Scott, Grace and Garcia would be the group that could deliver a claret jug for the non-Americans. The list of contenders just seems deeper for those not bleeding red, white and blue.

The top four players in the world have won six of the last eight major championships. Who will have the best finish among the top four?

HOGGARD: Dustin Johnson. He appeared unbeatable through two rounds last year at St. Andrews, finished runner-up at The Open in 2011 and got on the major board with his Grand Slam breakthrough at last month’s U.S. Open. Although you could make a solid argument for any of the top four players in the world, the easiest thread to weave would be for DJ.

LAVNER: Dustin Johnson. He’s on the kind of roll that many have expected for years. DJ has overcome distraction (U.S. Open) and a large weekend deficit (Bridgestone) to win his last two events, and now he heads to The Open, where he has four top 15 finishes. Johnson’s excellent driving gives him a massive advantage at a course that is playing softer than the R&A probably anticipated, and the small, relatively flat greens lessen the effectiveness of great putters like Day and Spieth. The Summer of DJ should continue here.

MOSIER: Dustin Johnson. Coming in with seven top fives in his last nine starts including back-to-back wins (U.S. Open, WGC-Bridgestone), he’s showing no signs of slowing. Since the 2010 Open, no one has more rounds in the 60s (10) in The Open than DJ. Don’t forget he was in contention through 36 holes last year and now that he’s broken through to capture his first major, weekend ballooning will be a thing of the past. Early reports from players are that they haven’t been able to reach some of the par 4s in two. DJ’s length will serve him well.

BAGGS: Jordan Spieth. He’s highly motivated and coming off a T-3 finish in Akron. The last two winners at Royal Troon have been Texans who have relied on short game and grit, rather than power. Let’s make it three. Friday’s conditions are supposed to be messy. As long as Spieth doesn’t get bad luck with the draw, he is prime to win the third leg of the career Grand Slam.

COFFIN: Rory McIlroy. Something tells me he is going to have a little extra motivation this week. He had a chip on his shoulder on Tuesday, is sick of the talk that he’s a distant member of golf’s Big 4 and missed The Open last year at St. Andrews because he was injured. So, no, he’s not the defending champion, but the last time he played The Open, he won. I like Rory with an edge, and I like him to finish better than the other three, if not win it all.

Pick a player outside the top 50 in the world who can contend?

HOGGARD: No. 242, Ernie Els. At 46, Els’ best golf is behind him and he hasn’t exactly blazed a trail this year with just a single top-10 finish on the PGA Tour. But the World Golf Hall of Famer can still have his moments. He’s four years removed from winning the claret jug and finished runner-up to Todd Hamilton the last time The Open was played at Troon. As Tom Watson proved in 2009, the game’s oldest championship brings out the best in ageless champions.

LAVNER: No. 52, Martin Kaymer. Predicting success for Kaymer has been a difficult task in recent years – see his red-hot May and June in 2014, after a miserable slump – but he’s back on an upswing, with five top 15s in his last eight worldwide starts. His Open record includes only three top-25s in eight career appearances, but all of those went for top 12s, including last year at St. Andrews. He also has plenty of motivation this summer, as he currently sits outside the qualifying bubble for the Ryder Cup.

MOSIER: No. 55, Jason Dufner. The major champion and world No. 55 got back in the winner’s circle this year at the CareerBuilder Challenge and has quietly notched four other top-10s this season including a T-8 at the U.S. Open last month. His best finish in The Open is a T-26 in 2013, but he’s making his seventh start at golf’s oldest major and I expect that experience to bode well for him this week.

BAGGS: No. 74, Graeme McDowell. G-Mac has a steady record in this major, with a pair of top-10s in the last four years. He tied for 10th last week at the Scottish Open and needs to play well during this huge stretch to earn his way onto the European Ryder Cup team.

COFFIN: No. 52, Martin Kaymer. He has quietly played well over the past two months, with three top-10 finishes in his last five events. His worst finish in that span was a 37th-place tie at the U.S. Open. Kaymer has only one top-10 finish in eight Open appearances but he’s also made seven cuts. So I’ll take a guy in decent form who should easily qualify for the weekend. He won’t win, but a top-10 finish is quite possible.