Scores were predictably low to start the Humana Challenge, but no one topped Michael Putnam in the opening round. Here's how things look in Palm Springs, where Putnam holds a one-shot lead in search of his first win:

What it means: Putnam appeared to be trailing Wilson before a late scoring discrepancy was corrected, knocking Wilson from 10 under to 8 under. That means it's Putnam on top, the leading money winner on the Web.com Tour in 2013 who qualified for the FedEx Cup Playoffs last season as a rookie.

Round of the day: Putnam played the Nicklaus Private course Thursday and started slowly, but he caught fire in a big way on the back nine. A birdie on No. 10 was followed by six circles in a row on Nos. 12-17, as Putnam shot a 7-under 29 on his inward half.

Best of the rest: Wilson hasn't won since claiming the Humana title in 2012, but he does have a pair of top-10 finishes this season and is again in contention after an 8-under 64 on the Nicklaus Private. He played his first four holes in 4 under, including an eagle on the par-5 13th, and missed only one green in regulation.

Biggest disappointment: Jason Dufner dropped some pounds in advance of his 2015 debut in Palm Springs, but the new slender physique didn't help him in the opening round. Dufner shot a 4-over 76 at La Quinta Country Club, a round that included six bogeys and a double bogey and a score that beat only six players in the 156-man field.

Main storyline heading into Friday: The scores will begin to separate in the second round, but two players expected to make a move are Kuchar, who tied for third last week in Hawaii, and Reed, the defending champ who won in Maui two weeks ago. Phil Mickelson will also look to bounce back after mustering only a 1-under 71 at La Quinta in the opening round.

Quote of the day: "I thought I was playing great, but not that great." - Wilson, whose opening 64 was first reported as a 62. On Wednesday's 'Morning Drive' Amy Wilson, president of the PGA Tour Wives Association stopped by to share information on the book 'Beyond the Fairways and Greens: A Look Inside the Lives of PGA Tour Families.' 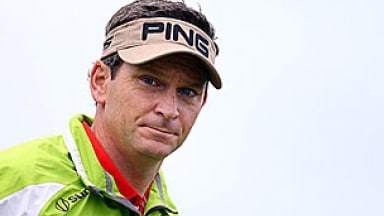 Mark Wilson knew he wasn't going to play the weekend at last week's Sony Open, so as he walked down the 18th fairway at Waialae, his caddie tried to offer a positive spin.