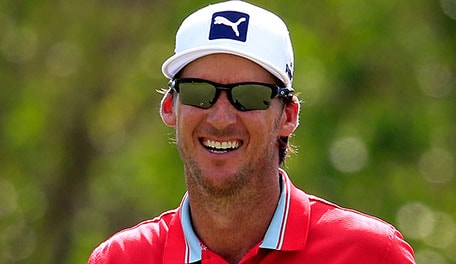 PALM HARBOR, Fla. – Will MacKenzie’s putting was so bad earlier this year, a friend begged him to try something, anything different on the greens.

That led to his experiment with the claw grip, and last week he shot a low round at Dye Preserve in South Florida.

One of the Tour’s worst putters – statistically, at least – MacKenzie has it rolling so far this week at the Valspar Championship. He needed fewer than 28 putts each of the first two rounds, holed more than 180 feet worth of putts and is ranked 13th in strokes gained-putting.

Best of all, after making a 37-footer for birdie on his final hole, he is at 5-under 137, one shot clear of the field after the morning wave completed play Friday at Innisbrook.

“It was like run-away-to-a-little-room-and-hide type of stuff,” he said.

MacKenzie admittedly came back too soon from left knee surgery last July. He played the fall events, but with minimal success, missing two cuts and finishing outside the top 50 in three others. He still doesn’t have a top-50 finish this calendar year, either, and has cashed only $65,000 this season.

“My season has been totally awful,” he said, “but I’m over it. I don’t feel like my back is against the wall.”

The strength of MacKenzie’s game always has been his mid-iron game, and even being a decent putter, a top-100 putter, would produce different results. He is a two-time Tour winner, after all, and in each of those wins (in 2006 and ’08) he used the claw grip.

So why did he ever ditch that method?

“Because I’m stupid,” he said. “The claw is a crutch from putting regular.”

MacKenzie uses a traditional grip on practice putts and then makes a late switch to the claw. He also puts his weight significantly on his left side – on his surgically repaired left knee – and pushes his hands forward, to drive the ball down the line.

“It’s not necessarily going to keep working,” he joked, “so let’s not get ahead of ourselves.”