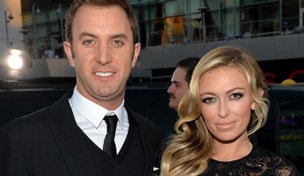 Getty Images
K.J. Choi of South Korea putts on the third green during the first round of the Greenbrier Classic at the Old White TPC on July 3, 2014 in White Sulphur Springs, West Virginia. (Photo by Todd Warshaw/Getty Images)  -

Johnson is staying this week at the family house of his fiancée, Paulina – and yes, that would be the house of the Gretzky family, just around the block in the neighborhood of Sherwood Country Club.

The eight-time PGA Tour champion took a few minutes Wednesday to answer questions about the spotlight on their relationship, his new caddie and being named in connection with another player’s lawsuit.

A: It has been a busy year, but it’s been a good one. Obviously, two wins is good, but between those I had times when I played really well and had some times where I didn’t play so well. I definitely would like to be a little more consistent and contend a little more.

Q: So that’s not the plan, just win your first start every year and put things in cruise control?

A: Well, that helps. Yeah, of course I want to win my first start every year. But after that, I want to continue.

Q: After you won at Kapalua, I asked you about Paulina and you just smiled and said, “I don’t know who you’re talking about.” At what point did you two decide that you would go public with your relationship?

A: We were just getting started then. We had just started dating, so it was just one of those things where it was Kapalua, I had just won and we were still trying to figure things out. But obviously now things are going really well. We’re really happy.

Q: I don’t mean to get all TMZ on you, but there’s a bigger spotlight now than just what you’ve had between the ropes. You’ve got Justin Timberlake gesturing to you at the AMAs; you’ve got Instagram photos making worldwide headlines. What’s that like?

A: I’m used to it more with golf, not off the course stuff. But it’s fine; I don’t mind it.

Q: Does it take some getting used to?

A: No, it’s a little different, but it’s nothing bad.

Q: What’s it like having the greatest hockey player of all-time as a future father-in-law?

A: Oh, it’s great. He’s awesome. He’s such a great guy and I’ve learned a lot just watching him. He’s the greatest hockey player to ever play and just to see someone who’s at that level and be around him and see how he conducts himself and interacts with people, he’s just the best. Couldn’t be a nicer guy, couldn’t be more supportive. It’s been great. And they just couldn’t be a better family – all of them. Janet is great; Trevor, Ty, Tristan, Emma, I’m really close with all of them.

Q: There’s not too much hockey in Myrtle Beach. Are you becoming a hockey guy?

A: I’m starting to get there. It’s on TV a lot at the house. We go to some games. I really love going to games. I enjoy going to a game and watching it live. You know, I’m still not a huge fan of watching it on TV. I’ll watch games; I mean, they’re exciting.  But going to games, for me, it’s like baseball. I don’t really like watching baseball on TV, but going to a baseball game, I enjoy that.

Q: Speaking of family, you’ve got a new caddie.

A: My brother [Austin], yeah. He’s going to be working for me now, so it’s going to be good. He caddied for me in Australia and China.

A: Nothing. Bobby is great. We did really well together for a long time. Nothing happened, I just like having my little brother out here with me. Obviously, he’s new, so he’s got a lot to learn, but I just really enjoy having him on the bag and having him with me. But Bobby’s been great. We had a really good run. But it’s more about having my brother with me.

Q: This isn’t the smoothest segue, but Vijay Singh’s lawyer recently mentioned your name in connection with those who have had an “actual or possible violation” of the PGA Tour’s anti-doping policy. What was your response to that?

A: There’s nothing I can really say. I don’t know why he would call me out. Obviously, he’s in a situation where he’s looking to better himself somehow, but there’s nothing there.

Q: Have you ever been punished or reprimanded for any kind of violation?

Q: Does it anger you to see your name in connection with that story?

Q: Would you consider any type of legal action for your name being used?