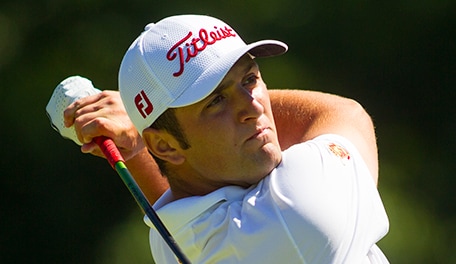 OLYMPIA FIELDS, Ill. – Jon Rahm missed a 8-foot birdie putt late Tuesday that would have assured him a spot in the match-play field at the U.S. Amateur.

“I slept fine though,” the No. 1-ranked amateur in the world said Wednesday. “I’m confident with my game.”

The Arizona State senior made a stress-free par and an easy birdie to advance out of an 18-for-10 playoff and reach match play here at Olympia Fields.

He wasn’t the only big-name amateur with a little extra work to do.

Stewart’s reward? A Round of 64 matchup against Lee McCoy, a senior at Georgia, the fifth-ranked amateur in the world and Stewart’s Walker Cup teammate.

“I can play a little more aggressive now,” Stewart said. “I’ve been in par mode."

Hossler looked like he was toast after a pair of doubles during an opening 75. Then he made four birdies over his final nine holes on the South Course Tuesday and made the cut on the number.

UCLA senior Jonathan Garrick, ranked inside the top 50 in the world, and USC star Rico Hoey failed to advance past the third extra hole.