Reed's goals are clear, dreams of being No. 1 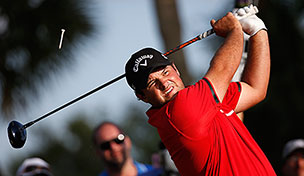 Getty Images
Fred Couples led by three shots when he went to the 12th tee on Sunday. Trying for the middle of the green, he pushed his tee shot to the right, and it landed about halfway up the far bank of Rae’s Creek. From where it was supposed to roll down into the water. From where EVERY ball rolls down into the water. Only Couples’ ball didn’t. Oh, it rolled down, but it stopped just short of getting wet. Couples was able to chip up and save par. “The biggest break, probably, in my life,” he said later. He went on to win by two shots over Raymond Floyd.  -

ORLANDO, Fla. – Two weeks later, Patrick Reed said he was amused by the reaction to his “top five” comment and that he wasn’t worried about rubbing his peers – most notably, the actual top five players in the world – the wrong way.

“I thought it was pretty funny,” he said Tuesday in advance of the Arnold Palmer Invitational at Bay Hill. “It was interesting to see how much of basically a stir that got up in the media.

“You know, when it comes down to it, that’s what I believe in. That’s how I see myself as a player. But you have to have that belief in yourself. If you don’t then you’re not going to play like it, and you’re definitely not going to be contending on Sundays.”

That’s something Reed, just 23, has been doing quite often since August. He has three wins in his last 14 starts, including the WGC-Cadillac Championship earlier this month. It was the biggest victory of his young career, and immediately after his final round, in a burst of heat-of-the-moment hubris, he proclaimed that he was a top-5 player in the world. In reality, he is No. 20 and climbing, fast.

“I wouldn’t think that it would rub anyone the wrong way,” he said, “just on the fact that people now know what I believe and what my goals are.”

His goals, at least immediately, are contending on a Bay Hill course that he played as a junior player on the AJGA circuit. In the next month, it’s being in the hunt in his first career major at the Masters. And long-term, yes, of course, it’s to be one of the best players in the world.

“Of course we’ve all dreamed of (number) one,” Reed said. “And that would be nice, but there’s a guy (Tiger Woods) that has a lock hold on that pretty tight.”