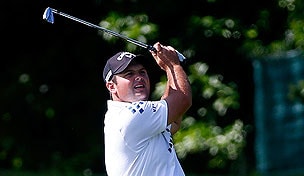 Getty Images
SAMMAMISH, WA - JUNE 11: Brittany Lincicome hits her tee shot on the first hole during the third round of the KPMG Women's PGA Championship at the Sahalee Country Club on June 11, 2016 in Sammamish, Washington. (Photo by Scott Halleran/Getty Images for KPMG)  -

ORLANDO, Fla. – Patrick Reed on Thursday got an up-close look at a top-5 player in the world. Actually, the player who could soon assume world No. 1.

Playing alongside Adam Scott, who shot a sizzling 10-under 62 to set the early pace at Bay Hill, Reed carded a 69 and finished his round feeling encouraged about how he handled the marquee pairing.

A decade ago, Scott was in Reed’s position, a 23-year-old trying to prove that he’s among the game’s elite. To see where the Australian is now – the reigning Masters champion, on the verge of ascending to No. 1 for the first time in his career – gave Reed confidence.

“It makes me feel great,” he said. “If I continue doing what I’m doing and keep on working really hard, I’ll hopefully be where he is at, the position where if he goes on and wins this week, he might be No. 1 in the world. To watch how he played today was very impressive.”

In his first start since winning at Doral, Reed hit 14 greens, took 30 putts and didn’t record a bogey. He has won three times in his last 14 starts, but those are also his only top 10s during that span.